Size750mL Proof80 (40% ABV)
This remarkable vodka is made with fog captured around San Francisco.
Notify me when this product is back in stock. 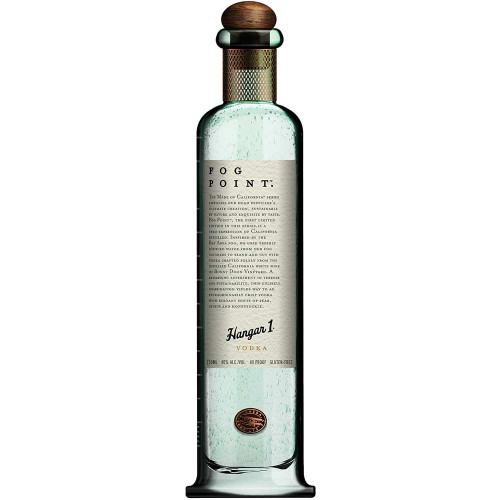 In 1982, Jörg Rupf laid the groundwork for the modern artisanal distillation movement when he founded St. George Spirits, situated in Alameda, California. Rupf had just emigrated to the U.S. from Germany, and was inspired by the spectacular quality of California's vineyards and fruit orchards. Drawing upon his family's generations of experience — the Rupf family had been distilling eau de vies in Germany for centuries — Rupf purchased a 65-gallon Holstein copper-pot still and began distilling spirits in a 5,000 square-foot warehouse in northern California. Today, Hangar 1 Vodka produces award-winning spirits in an airplane hangar adjacent to the Alameda Naval Air Station in California.

Hangar 1 Fog Point Vodka is a remarkable new creation from Head Distiller Caley Shoemaker and the entire Hangar One team. Described as “a true expression of California — distilled,” Hangar 1 Fog Point Vodka uses customer-built fog catchers to capture fog from various locations in San Francisco and convert it into water. The water is then blended with vodka distilled from premium grapes sourced from a sustainable vineyard on California’s Central Coast.

Hangar One Fog Point Vodka has a crisp, clean aroma and pronounced notes of citrus, particularly pear, on the palate. The finish is mildly sweet, with notes of honeysuckle lingering on the tongue.

“We say it’s made of California because truly, you’re tasting the Bay,” Shoemaker explains. “You’re tasting the soil and the grapes and all of that comes together really well in this interesting little project we’ve done here.”

Pick up bottle and taste the Bay today!

Crisp, clean aroma and pronounced notes of citrus, particularly pear, on the palate. The finish is mildly sweet, with notes of honeysuckle lingering on the tongue.