Size750mL Proof80 (40% ABV)
The eldest in G4's lineup, the Extra Añejo expression builds on the super-pure and crisp G4 Tequila base. It has spent at least 3 years in ex-bourbon oak barrels, resulting in an exceptionally smooth character with a delicate oakiness. 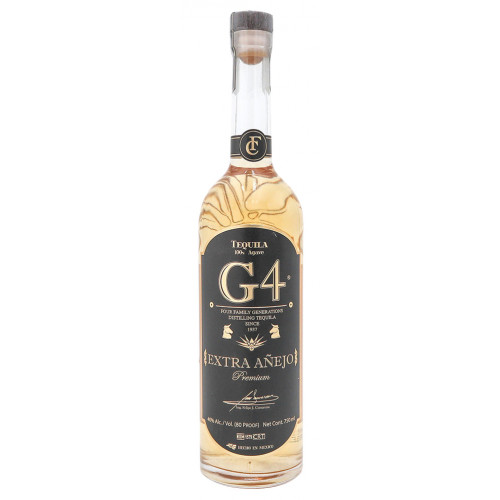 While the Extra Añejo might look comparatively light, it is due to a complete lack of any coloring additives — it has spent a minimum of 3 years in ex-bourbon American oak barrels. All the maturation takes place in-house, often giving the spirits twice the amount of aging necessary for a particular category. This gives the end product an exceptional smoothness and complexity. It's extra-smooth, agave-forward, with a pleasantly soft oakiness and vanilla note. As all their tequila, the Extra Añejo is made from 50% spring water and 50% harvested rainwater and bottled at 80 proof.

It expands on the Blanco's agave-forward, crisp, and smooth profile with a pleasantly soft oakiness, prominent floral and vanilla aroma, as well as notes of citrus and dark berries.