Caskers Rewards members earn up to 6 store points back when buying this bottle.

Size750mL Proof80 (40% ABV) each
Made from 100% blue weber agave, this añejo swept the Tequila.net awards, winning "Best of the Best" medal in 2012 in tequila blanco category.
Notify me when this product is back in stock. 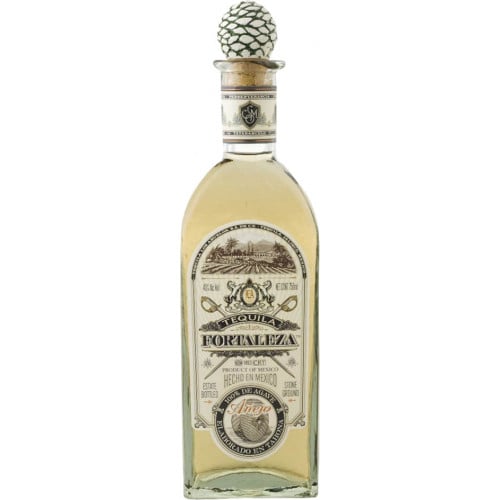 Fortaleza Tequila is made using 100% blue weber agave grown in the rich, volcanic soil of Jalisco. The agave, which are nourished by the summer rains and protected from harsh winter winds, are grown for seven to eight years before being harvested at their peak of maturity by expert jimadors (a jimadors is a type of Mexican farmer who specifically harvests agave). After the agave have been harvested, their hearts, or piñas, are steam cooked for 33 hours in a brick oven with meter-thick walls. Then, the soft, sweet piñas are crushed using a tahona (a giant stone wheel), the exact same method that Sauza's great-great grandfather used a century ago. The tahona allows Sauza to extract the sweetest juice from the piñas while discarding any unwanted impurities; were he to use a commercial shredder like larger distilleries, he might crush the smallest veins of the piña, out of which would come bitter and astringent compounds such as methanol.

After the piñas are crushed, the agave pulp, or mosto, is extracted and naturally fermented over the course of five days in small, wooden vats before being double-distilled in copper-pot stills.

Fortaleza Tequila Añejo rests in oak barrels for two to three years before being bottled by hand. It has notes of oak, vanilla and honey, along with hints of caramel and citrus, and earned the "Best of the Best Añejo Tequila"Medal at the 2012 Tequila.net awards.

Each bottle of Fortaleza Tequila is hand-blown in Tonala, Mexico, by artisan glassmakers and topped with with a handmade cap designed to resemble the heart of the agave plant.

This añejo swept the 2012 Tequila.net awards.