Size750mL Proof60 (30% ABV)
Made using Rwanda Mwasa beans from Blue Bottle Coffee Co. in San Francisco, this liqueur was rated one of the Top 50 Spirits of the Year by Wine Enthusiast Magazine.
Notify me when this product is back in stock. 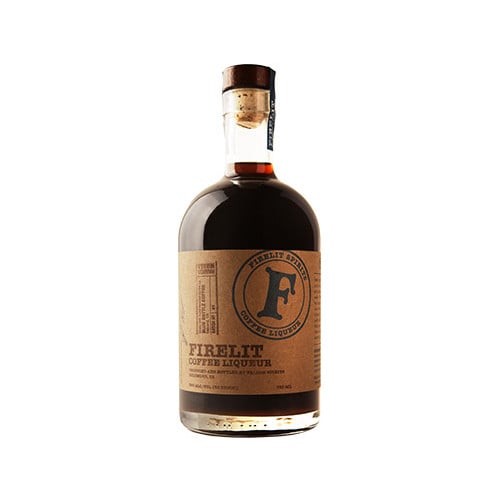 After several years of working as a sales representative for a spirits company, Jeff Kessinger decided to branch out on his own and produce his own spirits. Kessinger was inspired by his wife's family recipe for coffee liqueur, but when he learned that the brew's backbone was instant coffee, he knew he could do better.

"We start by collecting coffee samples from various high-end Bay area coffee roasters," says Kessinger. Then, a small sample of the liqueur is made with each type of coffee. "We do a blind tasting to select which origin and roast works best and will be used for our next batch. The chosen coffee roaster and origin is hand stamped on the side of the Firelit label."

Firelit Coffee Liqueur Batch #7 is made using Rwanda Mwasa beans from Blue Bottle Coffee Co. in San Francisco. Founded in 2010, Blue Bottle is the brainchild of James Freeman, who is known for his impeccable roasting of seasonal single-farm-origin beans. "Freeman himself picked out the beans for this batch," says Kessinger. "It's by far the darkest, richest and smoothest batch we have released yet."

Firelit Coffee Liqueur Batch #7 has a deep, earthy aroma with touches of milk chocolate and berries. Notes of coffee, vanilla and rich cream dominate the palate, and give way to a slightly spicy finish. "There was a lot of extra care and new techniques implemented to get the very best intensity and flavor out of the beautiful Rwanda Mwasa beans, without straying from Firelits overall profile."

Firelit earned a score of 94 points from Wine Enthusiast, which named it one of the Top 50 Spirits of 2011.

Deep, earthy aroma with touches of milk chocolate and berries. Notes of coffee, vanilla and rich cream dominate the palate. Slightly spicy finish, with touches of caramel and chewy leather.