This product is available in: CA, CT, DC Unfortunately, we can't ship to PO Boxes and APO addresses.

Size750mL Proof80 (40% ABV)
El Tesoro” translates to “the treasure.” Their Anejo is a blend of their “estate” Tequilas aged up to five years.
Notify me when this product is back in stock.

This product is available in: CA, CT, DC Unfortunately, we can't ship to PO Boxes and APO addresses. 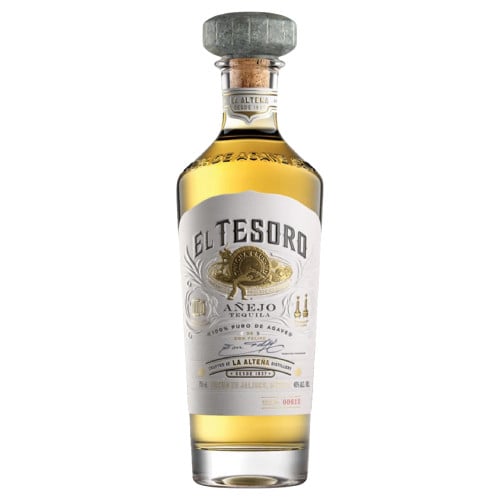 El Tesoro tequila was founded in 1937 by tequilero Don Felipe Camarena. His grandson, Master Distiller Carlos Camarena is now at the helm. El Tosoro is crafted from handpicked, 8-year-old 100% estate-grown blue agave sourced from La Alteña, an area with a highlands climate and mineral-rich soil.

The piñas are slow-roasted for three days in an old-fashioned, hornos oven, before being crushed by a two-ton volcanic rock tahona. La Altena Distillery has been operated by the Camarena family since … well, forever. Their first distillery was destroyed during the Mexican Revolution, but they rebuilt in 1937 near the town of Arandas in the heart of Tequila country.

Today, La Altena distillery is operated by grandson and master distiller Carlos Camarena. The “brand” El Tesoro is now owned by Beam Suntory. The piñas are slow-roasted for three days in an old-fashioned, hornos oven, before being crushed by a two-ton volcanic rock tahona.

“Anejo” tequilas must be aged for at least one year in oak. “El Tesoro” translates to “the treasure.” Their Anejo is a blend of their “estate” Tequilas aged up to five years in in ex-Bourbon American oak casks. Handcrafted from 100% blue agave using age old-school traditions dating back more than a century. This award-winning Añejo is bottled at 40% ABV.