Size750mL Proof85 (42.5% ABV)
This beautiful añejo is aged eight years in American oak ex-Bourbon barrels. It is one of the El Tesoro's most exquisitely aged Tequilas. Expect vibrant agave aromas, rich peppery flavors, and decadent buttery notes of caramel, cinnamon, and chocolate.
Notify me when this product is back in stock. 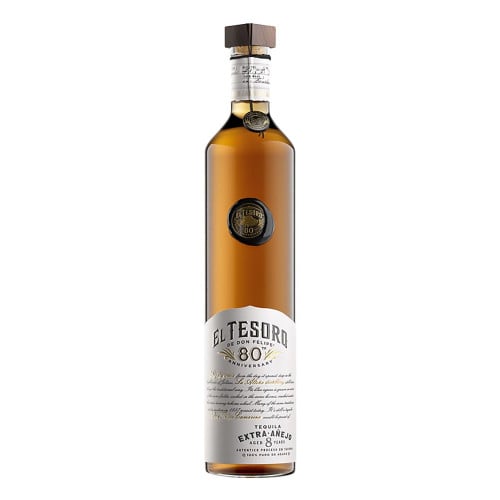 El Tesoro tequila was founded in 1937 by tequilero Don Felipe Camarena. His grandson, Master Distiller Carlos Camarena is now at the helm. El Tosoro is crafted from handpicked, 8-year-old 100% estate-grown blue agave sourced from La Alteña, an area with a highlands climate and mineral-rich soil.

The piñas are slow-roasted for three days in an old-fashioned, hornos oven, before being crushed by a two-ton volcanic rock tahona. For this El Tesoro 80th Anniversary Limited Edition, the agave juice was extracted and distilled to 85 proof at a low temperature, with no sugar or water added, in bespoke copper stills crafted to Don Felipe’s specifications.

This beautiful añejo is aged eight years in American oak ex-Bourbon barrels. It is one of the El Tesoro's most exquisitely aged Tequilas. Expect vibrant agave aromas, rich peppery flavors, and decadent buttery notes of caramel, cinnamon, and chocolate.

Vibrant aromas of agave, peppery notes and sweet buttery caramel on the nose. The palate is has caramel, cinnamon, chocolate, spice, and citrus. The finish is lingering and smooth.