Size750mL Proof80 (40% ABV)
Crafted with estate-grown agaves from the highlands of Jalisco, this ultra-premium tequila pays tribute to the legendary John Wayne. A blend of 3 to 5-year-old tequilas, it's finished in 3rd use French Grand Cru wine barrels.
Notify me when this product is back in stock. 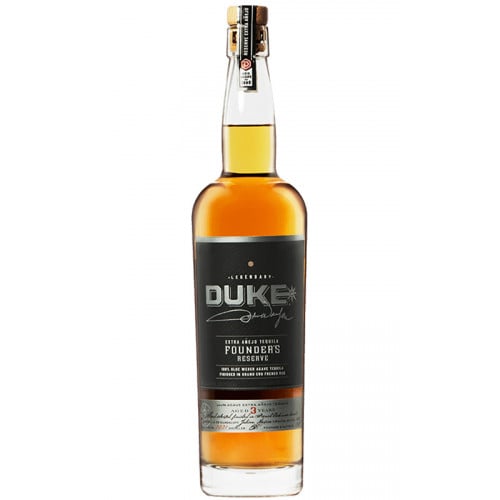 Duke bourbon is crafted in homage to John Wayne, whose nickname was "The Duke." Created by his son Ethan Wayne, the bourbon's flavor profile was made to reflect Wayne's personal whiskey preferences, which were preserved for over five decades and were only recently discovered. Duke Spirits not only pays tribute to the legend but continues his dream of having his own line of spirits ― who better to enact this dream, than Duke's son?

Ethan Wayne found a crate with his father's writing, messages, and bottles dating back to 1962. With the help of some of the greatest master distillers and the O.Z. Tyler Distillery in Owensboro, KY, Duke Spirits was born. "My father thrived on new projects and adventures and he always loved a great glass of whiskey at the end of the day," says Ethan Wayne. "Our goal with the Duke was to make a Bourbon that embodies the spirit, strength and richness my father personified while realizing his unfulfilled dream of distilling fine spirits."

The Duke wasn't only passionate about bourbon ― tequila was just as dear to him. This is how the Duke Grand Cru Tequila came to be. It's a threesome of premium single-estate tequilas that are crafted in the Jalisco highlands. The traditionally crafted spirits are made with hand-selected agave piñas that are grown on a single estate. The spirit is then distilled in small copper pot stills, before being aged. Aged 3 years, Duke Extra Añejo Tequila Founder's Reserve is a blend of 3 and 5-year-old tequilas. After its initial maturation in American oak whiskey casks, it's transferred into 3rd use French Grand Cru wine barrels for a round of finishing before being bottled at 80 proof.

Get your bottle of this tequila today!

This unique tequila features hints of fresh agave and citrus on the nose, along with plenty of oak notes. The palate has cooked agave and prominent cherry notes with hints of spice, culminating in a satisfyingly long and smooth finish.