Size750mL Proof80 Proof (40% ABV)
Made using organic cacao beans and certified kosher, this liqueur scored 90 points at the 2012 Ultimate Spirits Challenge.
Notify me when this product is back in stock. 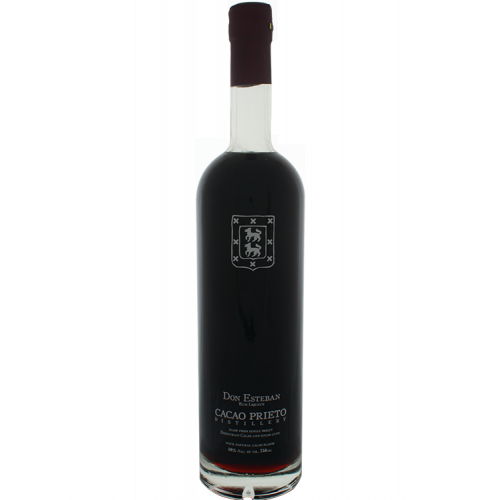 On the banks of the Atlantic Ocean, the city of Nagua lies just ten feet above sea level in the northeastern Dominican Republic. Its tropical climate (the average temperature is nearly 80° and the average annual rainfall is over 50 inches) has created an economy rooted in agriculture — Nagua produces and processes incredibly flavorful bananas, coconuts, pineapples and peanuts. In addition, Nagua is home to Coralina Farms, a 2,000-hectare plantation that produces 100% organic, sustainably-farmed cacao. Owned by the Preston family — the Preston's have been harvesting cacao for over a century in the Dominican Republic — Coralina Farms produces rare, heirloom varieties of the bean.

Daniel Prieto Preston, master distiller at Cacao Prieto, imports cacao beans from his family's farm in the Dominican Republic to his distillery in Brooklyn, New York. There, he and his team of distillers hand-roast each bean. Following the roasting process, his team cracks each bean and separates the cacao nibs from their husks using a vortex winnower that Preston — a former aerospace engineer — invented himself. The winnower eliminates more husk than ordinary separators, leaving behind unadulterated, raw cacao nibs. The cacao nibs are then mixed with organic cane sugar (also imported from the Dominican Republic), and the mixture is fermented using a strain of beneficial yeast cultivated at the distillery. Following fermentation, the mash is distilled inside a 1,000 liter, Christian Carl copper still imported from Germany (Preston also designed the still).

The still produces a distillate similar to a cacao-flavored brandy. This distillate is infused in additional organic cacao, resulting in a richer liqueur. Afterwards, the liqueur is filtered and then aged for approximately three months in new, heavily toasted American oak casks. Following its slumber in the oak casks, Preston adds additional organic cane juice, giving the liqueur a slightly sweeter flavor profile than Don Rafael Cacao Rum.

"There are lots of chocolate liqueurs, but those are made from alkalized cocoa powder mixed with fat and spirit—it's basically a Yoo-Hoo plus vodka," says Preston. "What we have is a true spirit: it has the viscosity of vodka, it's not thick and syrupy, but the aroma is a big, dark-chocolate fragrance, and the taste has these slightly bitter nuances, with a lot of complexity."

Scoring 90 points at the 2012 Ultimate Spirits Challenge and certified kosher, Don Esteban can be sipped neat or used to make the perfect cocktail. Pick up a bottle today!