Size1L Proof80 (40% ABV)
This unique vodka is made with cold-brew coffee from Death Wish Coffee Co.
Notify me when this product is back in stock. 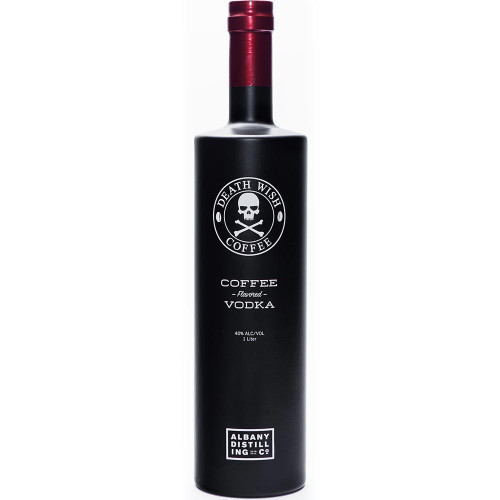 Skip to the beginning of the images gallery
1 Liter

Just steps from where Albany’s first distillery — an 18th-century rum distillery — was once located, John Curtin and Rich Sicari, owners and distillers of Albany Distilling Co., are making the region’s first local spirits since Prohibition, and are recapturing New York State’s rich distilling heritage in the process.

A self-described “modest operation,” Curtin and Sicari proudly craft their spirits one small batch at a time. Their emphasis on local sourcing and production is evident in their collaboration with Death Wish Coffee Co., another Albany-based business which purportedly brews the “world’s strongest coffee.” Curtin and Sicari have been lending their expertise to Death Wish’s Barrel Brand, which uses coffee beans aged in freshly-poured oak barrels from Albany Distilling Co., drawing out much of the spirit’s flavor.

Building off the success of this revolutionary idea, Albany Distilling Co. and Death Wish Coffee Co. have teamed up once again to create Death Wish Coffee Vodka. “It seemed like a natural progression,” says Curtin.

Death Wish Coffee Vodka is made by marrying Albany Distilling Co.’s ALB Vodka, which is made from American corn and distilled six times, with Death Wish Coffee Co.’s cold-brew coffee. The result is a soft, bittersweet vodka with notes of chocolate, honey and coffee beans persisting from the nose all the way through the finish.

Pick up a bottle of this limited release vodka today!

Soft, bitter-sweet vodka with notes of chocolate, honey and coffee beans persisting from the nose all the way through the finish.

3.3 out of 5
(5 reviews)
Write a review
Real email address is required to social networks
Sign in
Login with Google
Login with Facebook
Or
We also recommend