Learn more
Size750mL Proof80 (40% ABV)
Aged for 18 months in Jack Daniels barrels, this tequila earned the Triple Gold Medal at the Micro Liquor Spirits Competition in 2011.
Notify me when this product is back in stock. 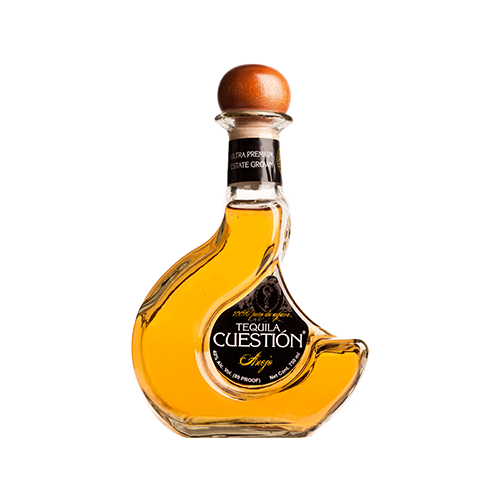 Under the watchful eye of expert agave farmers (or los jimadores), blue weber agave plants are matured for nearly a decade on the Cuestion estate (or hacienda), situated in the highlands of Jalisco, Mexico. "Some farms harvest their agave after just two or three years," says Jose de Jesus Dominguez Figueroa, one of the founders of Cuestion Tequila Company. "We let ours mature for nearly a decade in order to ensure they are incredibly ripe and flavorful."

After the agave plants have matured, the jimadores hand-select and harvest the plants they believe will produce the best tequila. The spiky leaves and roots of the plant are sheared, and the heart of the agave (or piña) is taken to Cuestion Tequila Company's distillery. At the distillery, the piña is split before being roasted in stainless steel ovens for three days. This roasting process, which gives Cuestion Tequila its signature, smoky flavor profile, softens the fibers of the piña and caramelizes the plants natural sugars.

After the piña is roasted, it is crushed under a stone wheel and the remaining pulp and fibers are fermented. Following fermentation, the tequila is twice-distilled through copper pot stills. "We distill slowly," says Figueroa, "in order to ensure that we don't alter the natural flavors of the agave."

Following distillation, Cuestion Tequila Añejo is laid into Jack Daniels Tennessee Whiskey barrels, where it ages for 18 months. The whiskey barrels add sweet notes of chocolate and caramel to the tequila, and round out the flavor notes of citrus and cloves. After aging, each batch of Cuestion Tequila is bottled in a unique, hand-blown glass bottle shaped like a question mark.

Aroma of citrus, with a touch of oak, honey and caramel. Sweet notes of dark chocolate, caramel and citrus which nicely balance out the flavors of clove and pepper. Dry and fruity body, with a hints of roasted peppers, jalapeno and bananas.