Size1420mL Proof14 (7% ABV)
Based on Crown Royal 's classic Canadian Whisky, this ready-to-drink cocktail contains apple, cranberry, and other natural flavors. Carbonated and bottled at 14 proof, this refreshing drink comes in a four-pack of 12 fl. oz. cans.
Notify me when this product is back in stock. 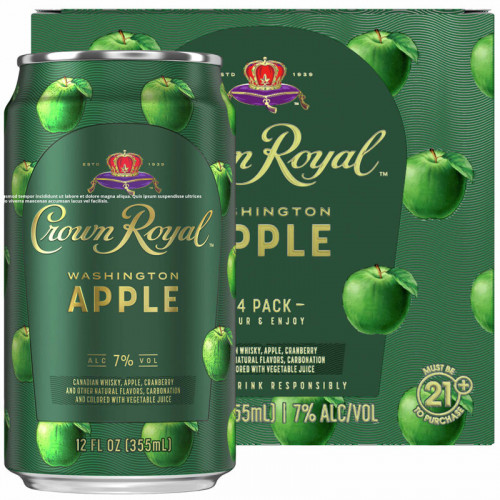 They also have the Flavor Series of four flavored whiskies, including Salted Caramel, Vanilla, Apple, and Peach. The Crown Royal Washington Apple Whisky Cocktail is the distant relative of the very popular flavored expression, the Regal Apple Flavored Whisky. It's a part of the recently released series of ready-to-drink canned cocktails. Their whiskey serves as the base to which Washington green apple, cranberry, other natural flavors, and carbonation are added.

With the smooth and creamy whiskey as its base, this carbonated cocktail features a balance of sweetness and tartness with juicy apple and cranberry flavors.