Learn more
Size750mL Proof76 (38% ABV) *Please note that the ABV of this bottle may vary
Distilled using the Charentais method and aged 4 months in different oak casks, this spirit comes from one of the oldest commercial tequila distilleries in Mexico. You'll find 2 piña-shaped glasses in this gift box as well.
Notify me when this product is back in stock. 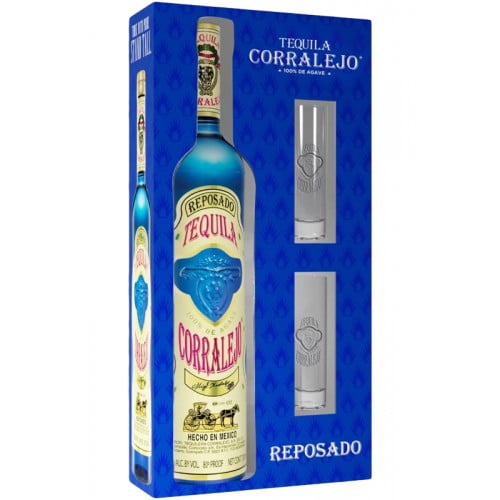 Hacienda Corralejo, located just outside of Pénjamo in the Mexican state of Guanajuato, was the first estate in Mexico to produce tequila as a commercial venture, and as such, it is among only a few distilleries granted the right to produce tequila in a province other than Jalisco. The hacienda, which was originally built in 1700, is surrounded by blue weber agave as far as the eye can see, and has been making tequila deeply rooted in history, tradition, and the vibrant culture of Mexico for nearly 250 years.

Corralejo tequila is made with 100% Blue Weber agave. The majority of the agave is estate-grown, which allows the distillers to control the quality from the very beginning. This quality assurance process starts when the agave plants are only 2–3 years old, when stable and healthy shoots, or hijuelos, are selected and planted in a specialty soil blend. When the agave is fully ripe at the age of 6–8 years, it is harvested and the leaves are removed. The piñas are slowly roasted in a stone clay oven for 36 hours, rested for 12 hours, and pressed to extract the juice, which is then fermented for 36 hours. The distillery uses a proprietary strain of yeast, LCORRA1, which was cultivated from the very first press of the estate agave, and developed in partnership with the Universidad de Guanajuato. All the Corralejo tequilas are double-distilled using the Charentais method, which is rare in the tequila industry. The fermented juice (mosto) is first distilled in a continuous or column still, while the second distillation takes place in an Alembic copper pot still, resulting in a refined and wonderfully aromatic tequila.

If not bottled unaged as Blanco, the tequila is put in oak barrels to mature. The tequila is then bottled at the estate, giving its producers complete oversight until the very last production step. Corralejo Reposado Tequila is made with 100% handpicked Blue Weber agave. This tequila is double-distilled using the 400-year-old Charentais method, and aged 4 months in French, American, and Encino oak barrels. The gift set includes the Reposado and 2 piña glasses, shaped like the heart of the agave plant.

The nose has aromas of sweet vanilla, honey, spice, and hints of oak. Notes of lemon-lime, peppercorn, honey, oak, and agave on the palate are followed by a smooth, warm, and medium-bodied finish.