This product is available in: CA, DC, NE, NH, NY Unfortunately, we can't ship to PO Boxes and APO addresses.

Size750mL Proof80 (40% ABV)
The Corralejo 1821 Tequila Extra Añejo is produced in Pénjamo, at the heart of Mexican history and tequila making tradition. An award-winning Mexican tequila, it is made from 100% blue agave and aged for 36 months in toasted oak barrels, resulting in an impeccably smooth taste.
Notify me when this product is back in stock.

This product is available in: CA, DC, NE, NH, NY Unfortunately, we can't ship to PO Boxes and APO addresses. 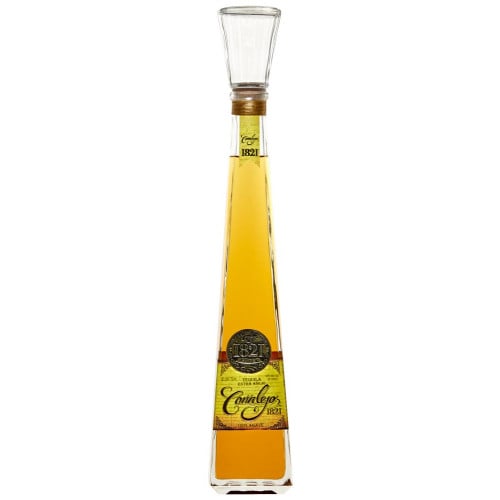 At the heart of Mexico, there is a beautiful hacienda just outside the town of Pénjamo in the Mexican state of Guanajuato: Hacienda Corralejo. It is a place drenched in history, the vibrant culture of Mexico and tequila making tradition. Originally built in 1700 and today surrounded by blue weber agave as far as the eye can see, it stands on the land where Father Hidalgo, a key figure in the Mexican War of Independence, was born. Most famous for his speech, titled the Cry of Dolores, where he called for the end of Spanish colonial rule, he sacrificed his life for the independence of his homeland. Today, the hacienda tells an authentic story of Mexico's history, but also its own story, which was written over 300 years and can be admired in every corner of the estate as well as tasted in every single tequila bottle produced.

Corralejo 1821 Tequila Extra Añejo is one of those bottles. Honoring the revolutionary spirit and the year when Mexico gained its independence on the shoulders of great and unbreakable men like Father Hidalgo, this is a 100% blue agave tequila. Produced in copper pot stills and double distilled, it is aged for 36 months in a fine selection of toasted American oak barrels of maximum 52 gallons. The high-quality production and the long ageing process result in an impeccable, smooth flavor, but what really sets this tequila apart is the fact that Corralejo employs the 400-year-old Charentais method of distillation, the same method perfected by the French in distilling cognac. The sweet notes of cooked agave are complemented with spices and the smoky, woody flavor brought on by the fine toasted barrels. Coming in an elegant bottle, this award-winning, authentic tequila reflects hundreds of years of Mexican tequila making tradition.

Beautiful amber color with copper flashes. On the nose, it is sweet notes of cooked agave, complimented with cinnamon, pepper and clove. On the palate, smoky notes mix with herbal, fruity aromas of coffee, walnut, apple and green pineapple. Finish is smoky and woody with a smooth and long aftertaste, featuring notes of citruses.