Size750mL Proof80 (40% ABV)
This special edition Rosa-Reposado tequila first rest for 3 months in French white oak Cabernet casks before being finished in Spanish Sherry casks. The barrels aren't charred, letting the agave shine after the resting period.
Notify me when this product is back in stock. 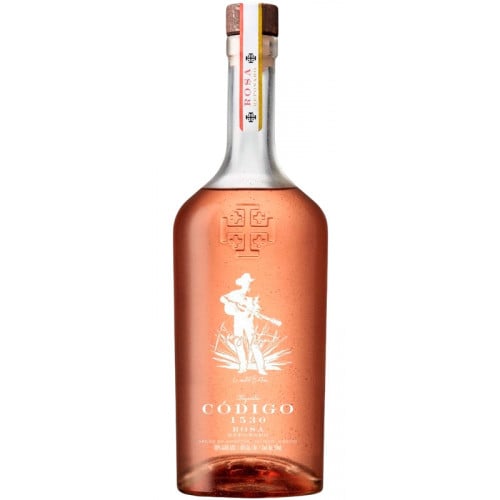 All Código 1530 Tequila expressions are made from 100% Blue Weber agave. After the agaves have matured for seven to ten years, they are harvested and cooked in stainless steel ovens, where they are fermented using an organic baker’s yeast. The agave spirit is twice distilled through handmade stills.

Código 1530 Rosa Reposado George Strait edition is the brand's first double barrel-aged rosa-reposado expression. The country music icon has been a partner and longtime fan of Código, even writing an eponymous song about the spirit. This special edition twist on Código's Rosa Tequila is aged in French oak Cabernet barrels for approximately 3 months before being finished in Spanish Sherry casks.

For generations, Codigo 1530 Tequila remained a closely-guarded secret among Los Bajos' finest jimadores. The recipe for Código 1530 has been passed down and perfected for generations. The tequila is crafted using the time-honored customs and traditions of the Los Bajos region as well as the town of Amatitán, the birthplace of Tequila. Código 1530 is named after "Los Códigos," the pre-colonial old world codes and customs that shaped the town of Amatitán and the Los Bajos region.


Once known as the El Tequila Privado, "the private Tequila," the label has been introduced to the world for the very first time in 2016 by Federico "Fede" Vaughan, CEO & Co-Founder of Código 1530 and honorary custodian of its private recipe, and Co-Founder and Executive Chairman Ron Snyder, a longtime friend of Federico and seasoned business executive.

The Código 1530 range includes a Blanco, Reposado, Añejo, an Extra Añejo Tequila, and a Rosa.
Explore all Código 1530 bottles >>

You can expect inviting aromas of fresh agave, dark fruit, and citrus on the nose. The fruity palate has cooked agave, lemon zest, and cherry notes. The finish is refreshingly crisp and pure.