Size750mL Proof80 (40% ABV)
Only 350 bottles of this luxurious tequila were produced. Crafted with mature agaves and pure volcanic rock-filtered water, the tequila matured for 13 years in oak casks. After its initial maturation, it spent another 6 months in ex-cognac casks.
Notify me when this product is back in stock. 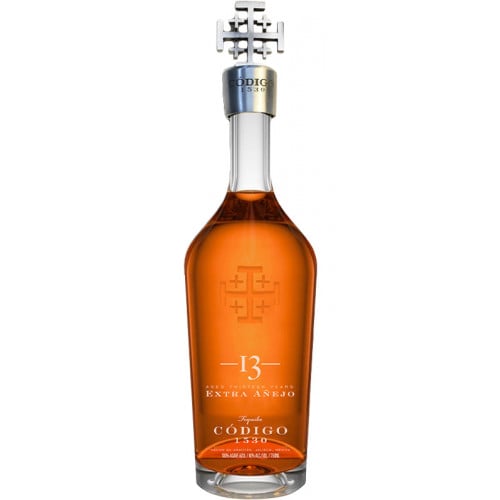 Código 1530's special releases are a sight to behold, and the 13-year-old Añejo Tequila is no exception. The ultra-luxurious expression is crafted from mature agaves, volcanic rock-filtered water, and no other additives ― you'll find no sugar, coloring, or anything else distracting from the pure aroma and taste. After its initial maturation period, one of the oldest tequilas in the world is finished for 6 months in French oak casks that used to hold cognac. Naturally, the bottle is a luxurious affair, having been handcrafted by local artisans. Only 350 bottles of this ultra-premium tequila were produced.

Get one of only 350 bottles of this delectable expression today!

For generations, Codigo 1530 Tequila remained a closely-guarded secret among Los Bajos' finest jimadores. The recipe for Código 1530 has been passed down and perfected for generations. The tequila is crafted using the time-honored customs and traditions of the Los Bajos region as well as the town of Amatitán, the birthplace of Tequila. Código 1530 is named after "Los Códigos," the pre-colonial old world codes and customs that shaped the town of Amatitán and the Los Bajos region.


Once known as the El Tequila Privado, "the private Tequila," the label has been introduced to the world for the very first time in 2016 by Federico "Fede" Vaughan, CEO & Co-Founder of Código 1530 and honorary custodian of its private recipe, and Co-Founder and Executive Chairman Ron Snyder, a longtime friend of Federico and seasoned business executive.

The Código 1530 range includes a Blanco, Reposado, Añejo, an Extra Añejo Tequila, and a Rosa.
Explore all Código 1530 bottles >>

The nose is luxurious with vanilla sweetness, cocoa, and cinnamon aromas. The palate is smoky and earthy with exotic spice notes, agave, oak, and hints of dried fruit, culminating in a balanced, smooth, and rich finish with the notes lingering.