This product is available in: CA, DC, FL, NE, NH Unfortunately, we can't ship to PO Boxes and APO addresses.

Size375mL Proof80 (40% ABV)
George Clooney and Rande Gerber have turned out to be quite the tequila makers. Crafted using agave from the Jalisco Highlands, this Reposado has refined highly nuanced flavors, and as the founders put it “won't burn going down,” or “give you a hangover” in the morning.
Notify me when this product is back in stock.

This product is available in: CA, DC, FL, NE, NH Unfortunately, we can't ship to PO Boxes and APO addresses. 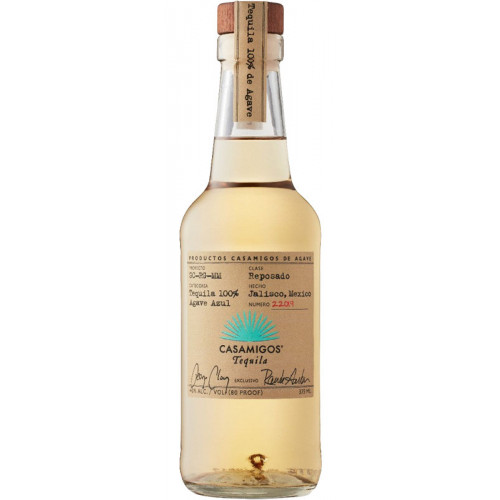 Often classified in the same area as Casa Noble Tequilas, Casamigos is crafted from agave sourced from the Highlands of Jalisco. Though the businesses success is propelled by celebrity, Clooney and Gerber have succeeded in crafting a high-quality product with sophisticated, nuanced flavors. Casamigos Tequila Reposado is made from 100% Agave, produced at Productos Finos de Agave in the Highlands of Jalisco, Mexico.

This small batch, ultra-premium Tequila is made from the finest, hand-selected Blue Weber Agave which is then slow cooked, and fermented slowly with proprietary yeast. The tequila rests for seven months in ex-whiskey barrels. Bottled at 80 proof, this tequila showcases soft, slightly oaky notes with hints of caramel and cocoa. It has a silky texture with a medium to long smooth finish.

Light smokiness on the nose with vibrant agave, nutty aromas, vanilla and spice. The palate is soft, with slightly oaky notes, hints of caramel, cocoa, sweet, rich and complex flavors of spice, a hint of a tobacco, and leather. The finish sweet with hints of pepper.