Size750mL Proof80 (40% ABV) each
These three award-winning tequilas are made exclusively from organic, estate-grown agave.

Casa Noble has recently changed its designs, and as the original labels are being phased out, there is still a chance that you might receive a bottle different than what is in the picture. Rest assured, the liquid remains the same, regardless of the design.
Notify me when this product is back in stock. 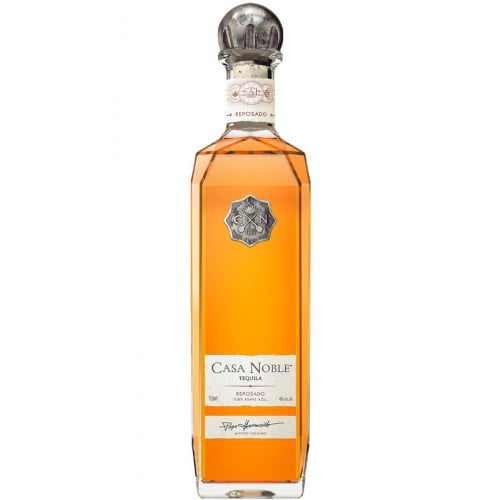 Each bottle of Casa Noble Tequila is made from blue weber agave plants, which are matured exclusively on the 3000-acre Casa Noble estate. The estate, which is situated in the Jalisco region of Mexico, enjoys rolling hills and steep valleys. "We have our own microclimate in the agave fields,"explains Jose Hermosillo, the owner of Casa Noble. "We grow our plants at a high altitude, and the fields are on an incline, which makes for more fibrous agaves, which yield a tequila with lots of character and spice and herbal notes. That's why we have our own agave fields, so we can control that profile and have very unique taste factors."

Once the agave, which are certified as organic, have matured for up to fourteen years, they are harvested by Casa Noble's legendary jimadors. "We hire our jimadors full time,"Hermosillo says, "so they're living on the land all their lives, for two or three generations, in some cases. So they know when the agaves are ready. Some people call them "agave whisperers.'" After the agave have been harvested, the hearts of the plant, or piñas are removed using a small, flat knife called a coa. "It's amazing how a jimador can touch that dark spot and say, "Oh, the sugar content of this is such and such","Hermosillo says of the piñas. "We'll take it to the lab, and the sugar content will be exactly what he said."

The piñas are then brought back to the distillery, where they are cooked in stone ovens for 36 hours at approximately 212° Fahrenheit (larger commercial distilleries cook piñas in stainless steel autoclaves for just six to eight hours). "Anyone can tell you the slow-cook method imparts a deeper, slightly smoky and sweet flavor that you can't achieve in fast cooking," says Hermosillo. Then, the piñas are crushed and fermented using local, airborne yeasts. As a result of using local yeasts, the tequila is influenced by the estate's surrounding orange, mango and lemon trees. Once fermentation is complete, Casa Noble Tequila is distilled three times through a copper-pot still.

Casa Noble Blanco Tequila is bottled immediately after distillation. It has strong notes of fresh agave, citrus and bananas that are balanced by hints of ginger, cinnamon and pepper. The tequila earned the Double Gold Medal at the San Francisco World Spirits Competition, and earned a score of 91 points from the Beverage Testing Institute.

Casa Noble Reposado Tequila is matured in French oak casks for 364 days, the maximum length permitted by law. It has notes of herbs, caramel and vanilla that are complemented by bursts of agave, toffee and oaky spices. The tequila earned the Gold Medal at the San Francisco World Spirits Competition and a score of 93 points from Wine Enthusiast.

Casa Noble Anejo Tequila is matured in French oak casks for two years. It has notes of milk chocolate, coffee and butterscotch, along with touches of pepper, oaky spices and citrus. The tequila earned the Double Gold Medal at the San Francisco World Spirits Competition and a score of 94 points from the Beverage Testing Institute.

"I immediately felt symbolically connected with Casa Noble," says Rock and Roll Hall of Famer Carlos Santana, who was born near the estate. "You go there and it looks like a sanctuary. It's not like other distilleries."

Silver: Aroma of pepper and cinnamon, with bursts of agave. Notes of fresh citrus, bananas and agave along with a hint of tropical fruit. Finishes with notes of cinnamon, herbs and ginger.