Size750mL Proof80 (40% ABV)
Founded by rock legend Sammy Hagar, Cabo Wabo produces premium traditional tequila in the highlands of Jalisco, Mexico. Aged between 4 and 6 months, the Reposado expression is bold yet balanced with agave, spice, and citrus notes.
Notify me when this product is back in stock. 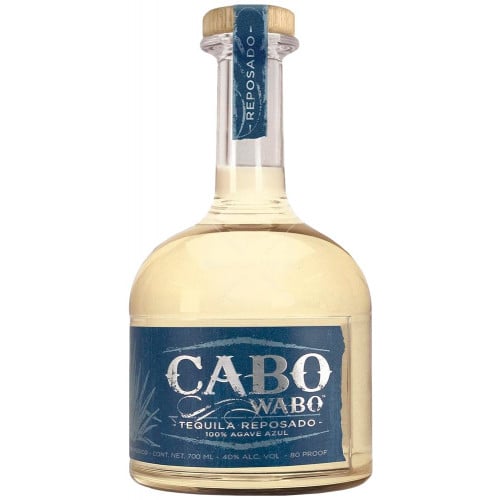 Cabo Wabo has a long and rich history. Founded by rockstar Sammy Hagar, famous for being Van Halen's frontman between 1986 and 1996, the restaurant opened its doors in 1990. Launched with Hagar's friend Marco Monroy in Cabo San Lucas, Baja California Sur, Mexico, the cantina had a rocky start but took off in the 90s, spawning franchises on the Las Vegas Strip and in Hollywood, California.

Hagar began selling an in-house tequila brand during that first decade, after having discovered the wonderful world of premium, traditionally-crafted Mexican spirit. The Cabo Wabo tequila from Jalisco, Mexico, became a smash hit, garnering numerous awards, Hagar eventually selling an 80% interest in the brand to Gruppo Campari in 2007. With Hagar in the back seat, the brand has received global recognition, currently offering Blanco, Reposado, and Añejo expressions.

The bold Cabo Wabo Reposado is crafted using the finest agave hearts, which are chopped and cooked in stainless steel autoclaves. The thicker cut of the distillate is taken in order to maximize the fruity and earthy notes while minimizing impurities at the same time. It is then aged between 4 and 6 months in American oak barrels, resulting in a bold agave, citrusy, and spicy profile.

The light-gold tequila has aromas of citrus, vanilla, and a wonderfully-balanced fruitiness. Fruit, hot pepper, butterscotch, and honey are on the palate that culminates with a spicy kick and a touch of smoke.