Size750mL Proof128 (64% ABV)
Peated to an unheard of 258 phenol parts per million — making it by far the peatiest whisky ever released — and bottled at an incredible 128 proof, this limited edition whisky is distilled entirely from Islay barley.
Notify me when this product is back in stock. 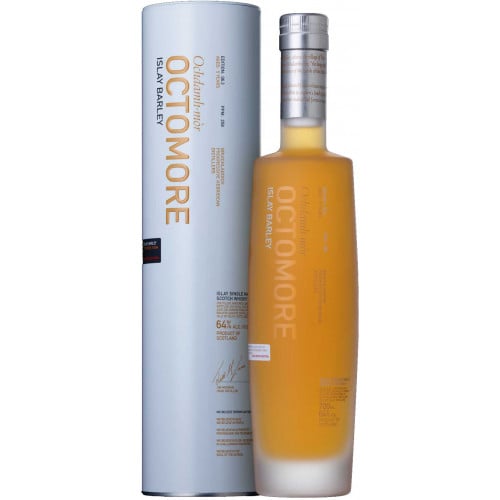 Bruichladdich Octomore 6.3 is the first release in Bruichladdich's Octomore series that is distilled entirely from barley grown on Islay. The whisky takes its name from Octomore Farm, a farm situated high above the village of Port Charlotte, just two miles away from Bruichladdich Distillery (the farm provides all of the barley used to create the whisky). Once barley from Octomore Farm has been harvested, it is malted before being peated to an absurdly high 258 phenol parts per million, making it by far the peatiest whisky in the world.

Once the whisky has been distilled, it is matured for five years before being bottled at 128 proof without the use of chill filtration or artificial coloring. The whisky is surprisingly gentle despite its proof, with floral notes, followed by vanilla and nuts. The softer notes yield to peat as the whisky opens on the palate.

Surprisingly gentle despite its proof, with floral notes, followed by vanilla and nuts. The softer notes yield to peat as the whisky opens on the palate.