Size1000mL Proof13 (6.5% ABV)
Made with Bombay Sapphire vapor-infused gin with 10 botanicals, this ready-to-drink canned cocktail is a classic gin & tonic that's only missing the ice. The matte finish of the cans keeps the liquid fresh and cool, making it the perfect choice for sunny days.
Notify me when this product is back in stock. 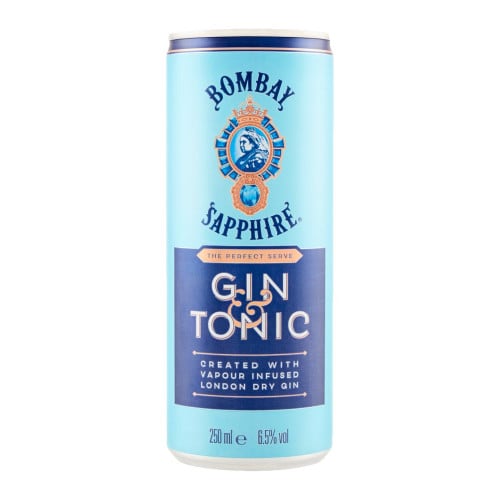 2020 has seen Bombay Sapphire join the canned cocktail game. The first release is "the usual suspect" ― the Bombay Sapphire Gin & Tonic. The classic cocktail comes in pre-mixed, ready-to-drink form, packaged in 250ml cans. "The development of Bombay Sapphire & Tonic took time for good reason, as we know our consumers expect only the very best from us and we are extremely proud to say that we’ve created a ready-to-drink befitting to the Bombay Sapphire name in terms of taste, quality, craft and ingredients," says VP Victoria Morris. Naturally, it's based on their vapor-infused gin and there are no artificial flavors or colors added. The matte finish keeps the contents safe from sunlight, meaning the gin & tonic remains fresh and cold for longer ― perfect for a BBQ in the sun.

Laverstoke Mill is as a historic building as they come, with the earliest written record of a mill at the location dating back to 1086. Having been owned by William the Conqueror and Henry VIII, the site has seen 4 royal visits in its rich history. In 1719 the mill was leased by printer Henry Portal and used for the manufacture of banknotes throughout the reign of Queen Victoria. During this time, several expansions were carried out in order to increase production. It was in 2010 that Bombay Spirits Company purchased Laverstoke Mill, opening the distillery doors to the public in 2014.
Explore all Bombay Sapphire bottles >>

It's no secret that Bombay Sapphire Gin makes a delicious gin & tonic. This ready-to-drink cocktail lets the signature delicate and fresh profile of the spirit shine through with a perfect balance of bitter-sweetness.