Size750mL Proof124 (62% ABV)
This Balcones Single Malt was finished in Balcones' very own Texas Rum casks and has won several "Double Gold" medals at the San Francisco World Spirits Competition.
Notify me when this product is back in stock. 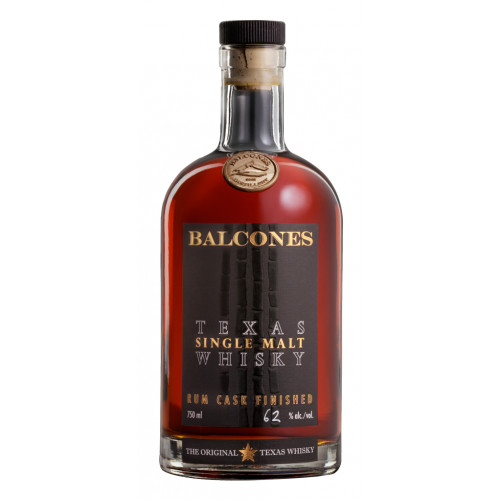 Handcrafted in small batches, Balcones Texas Single Malt Whisky is made from 100% malted Golden Promise barley. Golden Promise is an early-maturing spring barley that has a depth of flavor ideal for single malts. While it was popular in Scotland for many years, it gave way to cheaper barley that was higher in yield but lower in quality.

What makes the Rum Cask Single Malt expression special, is that the casks used for finishing used to hold their very own Texas Rum. It's been aged for at least 35 months and bottled at cask strength, making for a super-bold, rich, fruity, and spicy drink. It has garnered numerous awards, including multiple "Double Gold" medals at the San Francisco World Spirits Competition as well as New York World Wine & Spirits Competition.

There's tropical fruit and forest notes on the nose with pineapple, cedar, vanilla, raisins, dark berries, and cake. The palate has more tropical pineapple and berries, as well as sugar cane, dark chocolate, gingerbread, and herbal notes. Finishes long and spicy with mint and coriander.