Learn more
Size1000mL Proof58 (29% ABV) *Please note that the ABV of this bottle may vary
Crafted using the original recipe that was passed down from the Benedictine monks to a merchant, this historic amaro is made with several herbs, roots, spices, and essential oils. It features an exquisite contrast of bitter and sweet notes
Notify me when this product is back in stock. 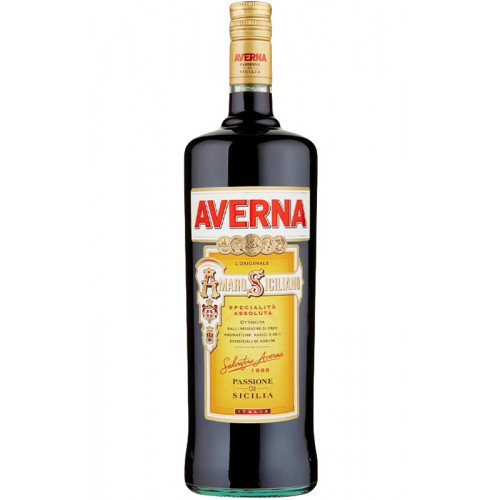 Today, the amaro is produced in Caltanissetta, Sicily, and bottled at the Campari plant. The traditional recipe has remained unchanged since 1868 and features a prolonged infusion process where a selection of herbs, roots, and spices are first combined, before other ingredients are added. These include pomegranates and essential oils of bitter oranges & lemons. Finally, the ingredients are blended with pure alcohol, water, and sugar, before being filtered, rested, and bottled at 58 proof.

Get your bottle of this authentic amaro today!

The recipe for Amaro Averna Siciliano dates back to the beginning of the 19th century, when Benedictine monks of Abbazia Di Santo Spirito crafted a liqueur that captured the essence of the Mediterranean with local herbs and the contrast of sweetness and bitterness. Salvatore Averna was a textile merchant that liked to help the local community. The monk Frá Girolamo gifted the recipe to Averna as a way of thanking the merchant in 1868. He began producing the liqueur at his farmhouse in Xiboli, eventually passing down the recipe to his son Francesco.

Francesco brought it with him to various fairs, eventually catching the eye of King Umberto I, who gifted Francesco a golden brooch with the emblem of House Savoy. In 1912, King Victor Emmanuel III granted the company the "Royal Household Patent" and the right to print the coat of arms on the bottle. The company weathered both World Wars, eventually going global and turning into a corporation. Today, Averna is a well-regarded global player and a staple in Italian households. In 2014, the Averna company was acquired by Campari.
Explore all Averna bottles >>

With the contrast of bitterness and sweetness in the foreground, Averna has notes of orange and licorice on one side and myrtle, juniper, rosemary, and sage on the other. The finish has a lingering bitterness and dark sugar sweetness.