Art in the Age's SNAP

Learn more
Size750mL Proof80 Proof (40% ABV) *Please note that the ABV of this bottle may vary
Inspired by traditional Lebkuchen (a type of traditional German ginger snap), SNAP is made using entirely organic ingredients.
Notify me when this product is back in stock. 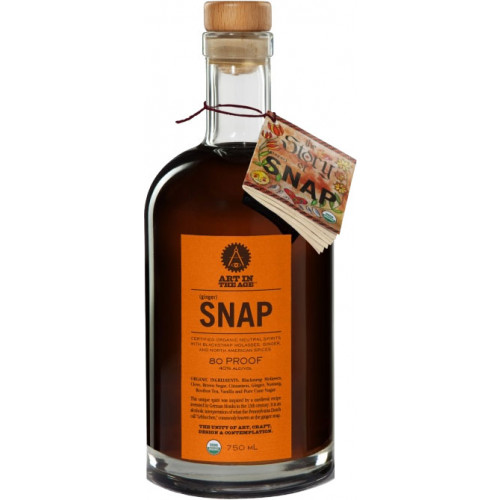 About Art in the Age's SNAP

In the 13th century, German monks created the first Lebkuchen, a traditional German treat closely resembling ginger snaps. In the 17th century, when German Anabaptists seeking religious freedom moved to Pennsylvania under the aegis of William Penn, they introduced Lebkuchen to the United States. Distinguished by its high-quality ingredients, including blackstrap molasses, cinnamon and ginger, along with its wafer-like bottom, Lebkuchen is widely regarded as one of finest types of ginger snap in the world.

Inspired by traditional Lebkuchen recipes, Art in the Age SNAP is distilled from pure cane sugar and made from with all-natural ingredients, including molasses, clove, brown sugar, vanilla, cinnamon, ginger, nutmeg, and rooibos tea. The molasses, which is derived from the third boiling of cane sugar or sugar beets, provides a touch of sweetness and is rich in minerals including iron, calcium and potassium. The nutmeg, clove and cinnamon add a hint of spiciness to SNAP, which is well balanced with notes of ginger and vanilla.

The result is a spirit that is slightly sweet, but much like ginger snaps themselves, has an edge of spiciness. In addition, the entire concoction is certified organic. "A lot of brands exploit that," says Grasse. "I do it because I want it to be historically accurate. Everything was organic back then."

Try a splash of SNAP paired with bourbon or Champagne and you will say "nix besser!"- Pennsylvania Dutch for "none better!"

About Art in the Age

"When we set out to start Art in the Age, we challenged ourselves," says Steve Grasse, the founder of Art in the Age Spirits. "I wanted to create the weirdest thing I could think of and put it in the simplest bottle possible and see if I could make that work. But I also wanted to create something that was really interesting and different and mix in my personal interest in history."
Explore all Art in the Age bottles >>

Aroma of gingerbread cookies. Initial flavor is sweet and slightly buttery with hints of ginger. Finish is mellow and warming, with a spicy edge.