Size750mL Proof80 (40% ABV)
Antelope Island Rum is an award-winning white rum produced by Dented Brick distillery in South Salt Lake. This spicy and warming expression is made from dehydrated green sugarcane juice and a touch of molasses from Lula Farm in Louisiana, and brought to proof with artesian, limestone-filtered water.
Notify me when this product is back in stock. 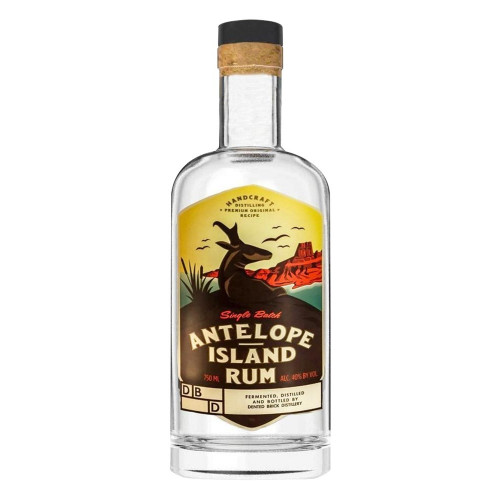 Utah might be the driest state in the USA (and one of the driest, if we are talking about rain), but it has a long history of distilling, going back to the 1800s. Dented Brick distillery is steeped in that history. The property where the distillery is located was once owned by Hugh Moon, an iconic figure in Utah's distilling past who emigrated from England to the USA and produced whiskey in Salt Lake City for the early Mormon pioneers in the 1850s. Dented Brick operates on a site that was part of a large farm Hugh purchased in 1856, and where he grew sugar cane, and likely rye and other fermentable ingredients. The distillery’s name also has a story attached to it. The well driller who was responsible for the distillery’s artesian well was killed in a blazing gunfight that left impressions in the bricks of his house. Some of those "dented bricks" are now a part of the distillery building.

It was however not history that brought Dented Brick founders to the location, but the water from the artesian well, following advice from an old Kentucky moonshiner: “It starts with the water!” The water in their well flows down from the Wasatch Mountains, shedding impurities and attracting the minerals through the layers of limestone to form the perfect foundation for their spirits. Their line of premium spirits features handcrafted rye whiskey, gin, vodka and rum that tell authentic tales about the land and its history. Using locally-sourced ingredients and responsible and sustainable production practices, Dented Brick crafts unique spirits from original recipes.

Antelope Island Rum is an award-winning white rum made from dehydrated green sugarcane juice from Lula Farm in Louisiana and a touch of molasses from the same source, and brought to proof with artesian, limestone-filtered water. The rum is named after Antelope Island, the largest of ten islands on the Great Salt Lake.

Aromas of Himalayan salt, vanilla, lime, and pineapple on the nose are followed by salty notes of apricot, Asian pear, and butterscotch toffee on the palate. The finish is long and luxurious.