Learn more
Size750mL Proof71 (35.5% ABV) *Please note that the ABV of this bottle may vary
The art of preserving peppers not in vinegar but in tequila, is a commonplace tradition in Mexico.
Notify me when this product is back in stock. 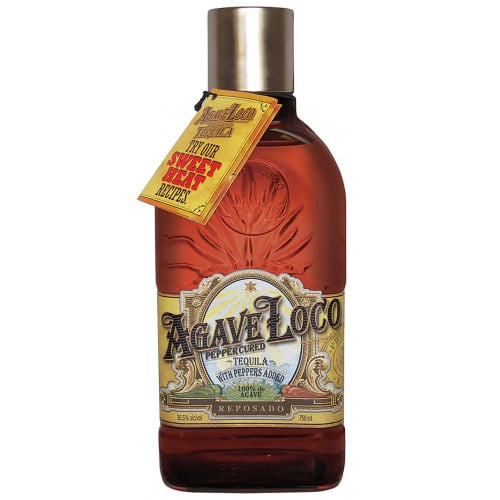 This Reposado Tequila is crafted from 100% Agave sourced from the Jalisco Highlands of Mexico. The tequila is aged for up to 6 months in ex- bourbon barrels, then infused with jalapeño, habanero and serrano peppers, in addition to three more varieties of sweet peppers, for a total of 6 pepper varietals. The peppers are then steeped in the aged tequila anywhere from 3 days to 2 weeks, a process that extracts the most flavorful essential oils from the peppers, yielding a “cured” tequila, with the powerful flavors of pepper, creating a “Sweet Heat.”

Tom Maas, President of Agave Loco Brands, has over 35 years of experience in the wine and spirits industry. His passion for distilling was solidified when he was 11 years old traveling around with his father, who worked on and built distilleries worldwide. While visiting one of the distilleries his father was constructing, Tom helped his father craft his first batch of whisky. Tom would go on to help expand three of the top selling whisky brands in the world: Jack Daniel’s, Canadian Club and Jim Beam. He has also used his valuable expertise to develop some of the most successful brands in the spirits industry: including his award winning brainchild, RumChata, a delicious combination of horchata and rum.

Agave Loco is also home to Agave Loco Tequilas. It is said that while in Mexico, master distiller Tom Maas discovered the technique of preserving peppers not in vinegar but in tequila, a common tradition practiced by the Mexican people. Tequila-flavored peppers sparked the idea of pepper-flavored tequila, and thus pepper-cured Tequila was born.
Explore all Agave Loco bottles >>

Mild pepper on the nose. The palate is clean with strong peppery flavors, and wood. The finish is also clean but fades quickly with more spicy notes.