Caskers Rewards members earn up to 4 store points back when buying this bottle.
Size700mL Proof80 (40% ABV)
For those about to drink 100% Blue Weber tequila on the rocks. We salute you with AC/DC Thunderstruck Reposado. Delicious, olden, and 100% artificial additives-free.
Notify me when this product is back in stock. 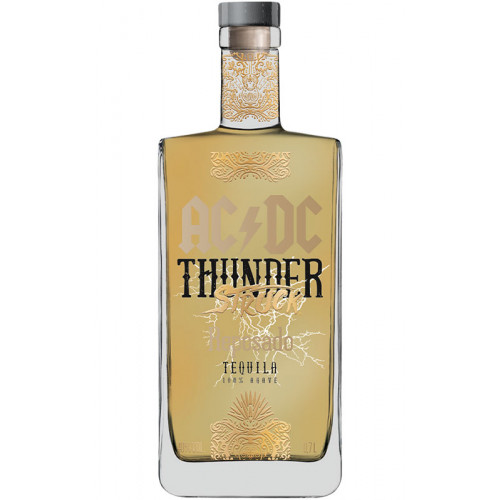 This is one of a two-part collaboration between the legendary rock band AC/DC and tequila producer Fabrica de Tequilas Fino. The latter is situated on the foot of Tequila Hill, in the equally legendary town of Tequila, Jalisco in Mexico, and is known for making top-quality agave products. Multiple award-winning tequilas are produced where the highly dedicated team achieves the delicate balance between modern mentality and traditional tequila-making.
This particular expression is named after the famous 1990’s AC/DC song (thunderstruck) that needs little to no introduction. The iconic Australian rock band collaborated with Fabrica de Tequilas Fino, and the result is an edgy and delicious spirit even by the makers’ standards.
The golden hue of the bottled liquor gives straight lightning bolts vibes that are perfectly underlined by the illustrations on the truly funky packaging.
AC/DC Thunderstruck Tequila Reposado is made only with 100% Blue Weber agave and aged for at least 2 months in American white oak barrels. The juice is slightly more robust and full-bodied due to said aging, thus having a vibrant flavor. It lands on the lower side of alcohol content.

The color is a striking golden hue. There is a sweet fruitiness on the palate.