Learn more
Size750mL Proof80 (40% ABV) *Please note that the ABV of this bottle may vary
1911 Vodka is made from apples distilled exclusively on a farm that has been owned by the same family for over a century.
Notify me when this product is back in stock. 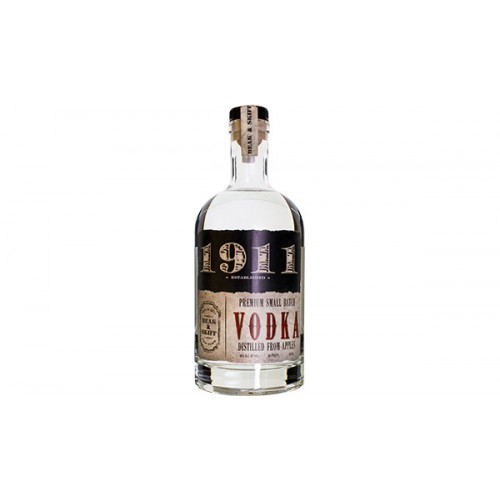 1911 Spirits Small Batch Vodka is distilled exclusively from New York apples grown at the Beak & Skiff Apple Orchards. Once the apples have been harvested, they are pressed into a sweet cider, fermented and then triple distilled through 1911's copper still. "It's our apples, it's our cider and it's our vodka that comes off that still," says Skiff. "You can turn around and look at those hills and see the apples that made that vodka. That's pretty unique."

As a result, 1911 Vodka has a smooth vanilla taste, with undertones of apple and caramel. The finish is soft and gentle, and lacks the burn typically associated with most vodkas. "This vodka is smooth" says Skiff. "I call it dangerously smooth."

"Our spirits have a genuine, natural flavor profile that comes directly from our family farm" says Skiff.

Pick up a genuine vodka today!

In 1911, George Skiff and Andrew Beak founded a 100-acre apple orchard in New York's Hudson Valley. At the time, the Hudson Valley, which extends from New York City northward through Albany, was home to thousands of farms, hundreds of which distilled the excess fruits and grains they harvested into spirits.

As a result of the onset of Prohibition, however, these farmers were forced to abandon their stills. Today, Marshall Skiff a third-generation farmer and master distiller shepherds his family legacy forward at 1911 Spirits.
Explore all 1911 Spirits bottles >>

Smooth vanilla profile, with undertones of apple and caramel. Finish is soft and gentle.