This product is available in: CA, CT, IL, NJ, WA Unfortunately, we can't ship to PO Boxes and APO addresses.

Size750mL Proof84 (42% ABV)
This smooth blended whiskey is aged for 10 years in American oak barrels with a #3 char, and cut with Rocky Mountain water.
Notify me when this product is back in stock.

This product is available in: CA, CT, IL, NJ, WA Unfortunately, we can't ship to PO Boxes and APO addresses. 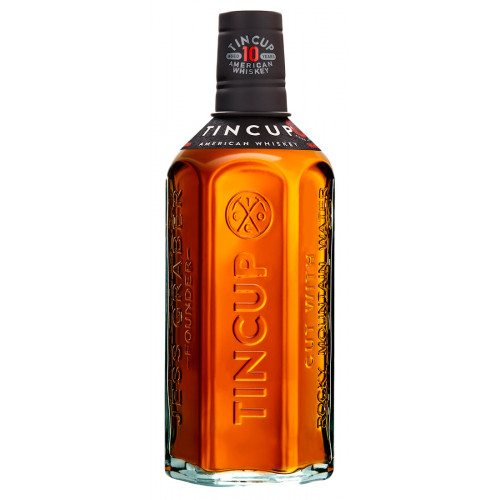 "I began distilling in 1972, just three months after moving to Colorado from Missouri at the age of 22," says Jess Graber, the master distiller behind Tincup American Whiskey. "My neighbor left me his 10 gallon still and I began tinkering with it in my spare time, reading up on distilling techniques in library books and experimenting at home. I guess I found my calling, because after 40 years, distilling is still my passion."

Tincup American Whiskey is the newest expression produced by Jess Graber. The whiskey is crafted from a mash of 64% corn, 32% rye and 4% malted barley. After distillation through copper-pot stills, the whiskey is matured in new, charred white oak barrels for four to five years. Then, the whiskey is shipped to Colorado, where it is brought to proof with Rocky Mountain snowmelt.

The name "Tin Cup" is "a nod to Colorado's first whiskey drinkers — the miners that came through looking for gold and drank their whiskey out of tin cups," says Garber. "The cap works as a cup too — you can use it to share with friends.”

Tincup 10 is crafted from a blend of rye, corn, and malted barley. Distilled in TINCUP’s classic style and aged for 10 years in American oak barrels with a #3 char, it is then cut with Rocky Mountain water for a smooth flavor profile.

Rich and sweet on the nose with nutty notes, nutmeg, green bananas, and caramel apples. The palate echoes the nose with additional notes of cinnamon, chocolate and citrus peel. The finish is smooth.