Size750mL ProofUncle Val's Botanical Gin 90 (45% ABV)Atsby Vermouths 16 Proof (32% ABV)
The Twisted Gin Martini Kit comes with gin that is distilled five times earning it a score of 96 points from The Tasting Panel Magazine as well as two vermouths that are made just outside of New York City.
Notify me when this product is back in stock. 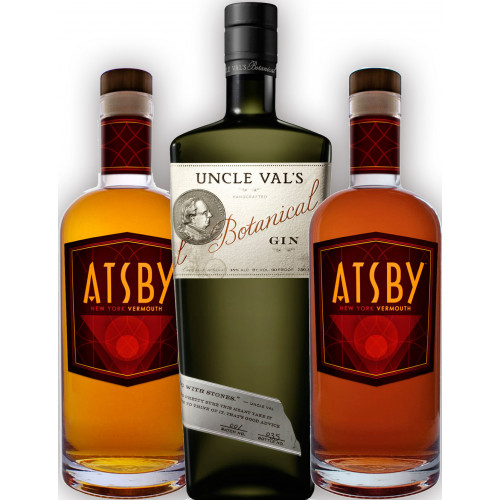 About The Twisted Gin Martini Kit

The martini is the most distinctly American cocktail ever created. And while the exact details around its origin are often disputed, either due to the originators throwing back one too many martinis or, perhaps, a simple lack of record keeping, most historians agree that the cocktail dates back to the late 1800s during the Gold Rush in California.

The story goes that a gold miner struck it rich and wanted to celebrate his good fortune at a local bar in the town of Martinez. The bartender mixed together the ingredients he had at his disposal and gave the lucky man the “Martinez Special” to which the man was delighted. How the cocktail was named is not definitive, some believe it is named after the town it was created while others speculate that it got its name because of Martini & Rossi Vermouth. Regardless of how the drink was named, the martini has become synonymous with cocktails and is a bar and household staple throughout the world.

Variations of the martini are far and wide, making it one of the most versatile cocktails. This Twisted Gin Martini Kit takes a new spin on the cocktail classic. With Uncle Val’s Botanical Gin, Atsby Amerthorn Vermouth and Atsby Armadillo Cake Vermouth, this kit creates a unique and well balanced martini.

Uncle Val's Botanical Gin has a complex yet subtle flavor profile. The distillery uses immersion bags (think big tea bags) in order to infuse the gin with the flavors from the botanicals. The immersion bags are steeped in the gin for several hours, although some remain in the gin longer in order to impart a stronger aroma and flavor. The lemon adds a burst of crisp citrus flavor which is balanced by the calming effect of the sage. While the lavender provides for an elegant, refined aroma, the cucumber adds a cooling, subtle freshness. The gin is then distilled five times over.

Atsby Vermouth — the dream and creation of Adam Ford, a lawyer by training and vinter by calling — is produced just outside of New York City and is leading a resurgence of world-class vermouth produced in the United States. Like so many before him, Ford's muse is his wife; her Italian heritage led him to discover a love and passion for vermouth. After a transcendent experience drinking a glass near Mont Blanc, Ford set out to create a new style of vermouth — one that paid homage to its European heritage yet reflected a New World aesthetic. Ford discovered a fine chardonnay from the North Fork wine region on Long Island, and a delicious apple brandy from the Finger Lakes in New York to fortify the vermouth. After tinkering with the formulas in his Manhattan apartment, Ford knew he had something special on his hands.

Infused with rare herbs and spices, including Chinese anise, French lavender and holy basil, Atsby Amberthorn is aromatic and dry, with herbal and floral notes (perfect in a martini without a twist). "It's a little bit thorny because it's a little bit delicate," says Ford. "The botanicals we use are rare indeed," he adds, "and so we make only very limited quantities."

Atsby Armadillo Cake is similarly infused with a variety of rare herbs, spices and flowers, including like cardamom, quassia, orange peel, Japanese shiitake mushrooms and nutmeg. Spicier than Atsby Amberthorn, it is medium-bodied and delicious.

So whether you always have your martini shaken, not stirred (cue approval from James Bond) or are less picky, this kit will make you the perfect Gin Martini every time.

Uncle Val's Botanical Gin has a complex yet subtle flavor profile. Initial aromas of citrus — primarily lime — followed by lavender and sage. Notes of crisp lemons and cool cucumbers with a hint of piney juniper. Atsby Amberthorn is aromatic and dry, with herbal and floral notes as well as flavors of lavender, Chinese anise and basil. Atsby Armadillo Cake is spicy and medium-bodied, with notes of orange peel, nutmeg and earthy mushrooms throughout.