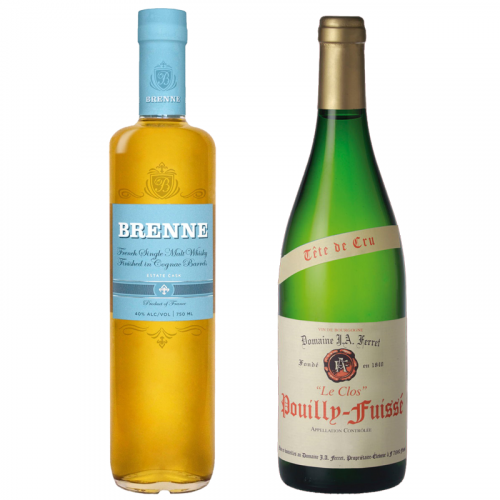 Four hundred kilometers southwest of Paris, the city of Cognac, France (population 19,066) lends its name to one of the world's best known types of brandy. There, a third-generation master distiller trained in the traditional art of cognac distillation — and with a secret love affair for whisky — has been making Brenne Single Malt Whisky since 2002.

He begins by harvesting 100% organic barley grown at his farm in Cognac — making Brenne the only organic French Single Malt Whisky in production today. After the barley is cool-fermented utilizing two to three different strains of yeast, the mash is carefully double-distilled in a copper alembic cognac still until it is ready for its slumber in new French Limousin oak casks. French Limousin oak — the most expensive type of wood for barrels in the world — is prized because it is loosely grained and porous, allowing it to impart more flavor and tannins to whisky that it comes in contact with. The French Limousin oak gives Brenne Single Malt Whisky notes of oaky chocolate and a slight hint of caramel.

Following its initial beautyrest in the French Limousin casks (the beautyrest averages five years), Brenne is double barreled, or finished, in freshly-emptied cognac barrels until perfectly matured. This unique finishing process gives the whisky notes of sweet vanilla that balance out the spicy notes of organic, malted barley. The cognac barrels also give Brenne a slightly perfumey aroma.

Established in 1840 in the heart of Southern Burgundy’s prime Chardonnay territory, Domaine J.A. Ferrett is one of the most renowned vineyards in Pouilly-Fuissé, and is nearly inseparable from the name of one of its early owners — Jeanne Ferrett. Ferret was known as a strict, extremely detailed steward of the winery, one who ran things with a unique precision until her passing in 1993 — she was well into her eighties at the time. Though scrupulous, Ferret was also lauded for her innovation, and was the first winemaker in the Pouilly-Fuissé region to bottle estate wines.

After her death, Ferrett’s daughter Colette took the reigns of the estate and further enhanced Domain J.A. Ferrett’s international reputation by focusing on the maturation period, experimenting with many different types of expensive oak barrels with which to age the wine. After Colette’s passing, the domaine was purchased by Louis Jadot, who, somewhat unsurprisingly, put another woman in charge, this time food scientiest-turned winemaker Audrey Braccini.

"A woman has a touch for precision, for winemaking that is extremely detailed — that was Madame Ferret's gift, and what I think a woman brings,” says Braccini. “For me, the purity of the Chardonnay grape is what drives me. Getting to the truth of each of the 50 plots. Each is vinified separately, but my task is to listen to the vineyard, to be invisible — it is about precision and sensitivity.”

Domaine Ferret Pouilly-Fuissé 2012 is made from a blend of the best parcels from Pouilly-Fuissé’s amphitheater. The grapes are grown in a combination of limestone and clay, and the vineyards themselves are each aged between 10 and 35 years. Approximately half of the wine is aged in concrete tanks, with the remainder aged in second- to fifth-use oak barrels. As a result, the wine has as aroma of fresh stone fruits, which leads to a weighty palate filled with acacia flower and hazelnut butter. The finish is long, intense and spicy.

Pick up The Oak Set with organic French Whisky and a famous wine, made by generations of women, for the most special woman in your life today.

Brenne French Single Malt Whisky has an initial nose of almond, vanilla, tree fruits and dark chocolate. Gives way to slightly floral and perfumey scent. Notes of orange peels, butter and warm spices. Medium long finish with a final kick of peppercorn and clove. Domaine Ferret Pouilly-Fuissé 2012 has as aroma of fresh stone fruits, which leads to a weighty palate filled with acacia flower and hazelnut butter. The finish is long, intense and spicy.