Learn more
Size375mL Proof92 (46% ABV) *Please note that the ABV of this bottle may vary
This distinctive New Zealand whisky is the first Single Malt outside of Europe and Japan to be matured and released as a 25 year old.
Notify me when this product is back in stock. 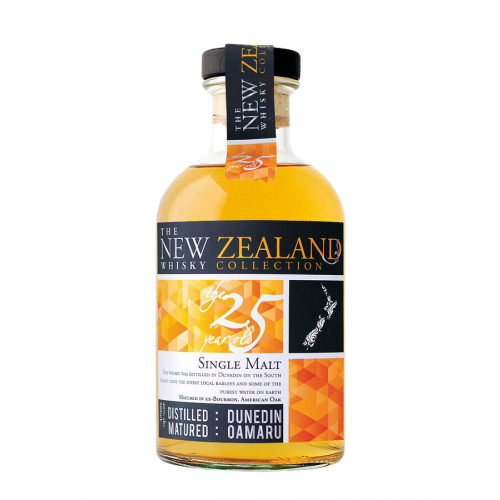 The Wilson’s Dunedin Distillery, also known as Willowbank Distillery, was established in 1974 on the South Island of New Zealand by the Baker family. It was the southerly distillery in the world, producing highly regarded Milford and Lammerlaw Whisky brands.

In 1997 the last whisky distillery in New Zealand was closed down, and hundreds of barrels of cask strength whisky were auctioned off or mothballed. The remaining stock is currently owned by The New Zealand Whisky Company purchased 443 barrels. Produced in what was once the world's southernmost distillery, the rare spirit is now stored inside a seaside warehouse in Oamaru, slowly being released to the public.

Crafted from 100% malted New Zealand Barely in the Willowbank distillery, Dunedin, this whisky is aged in American Oak, Ex-Bourbon barrels forty and a half decades, making this whisky the first Single Malt outside of Japan and Europe to be released 25 Years. This whisky is the embodiment of New World Whisky. It carries deep flavors sweet tropical fruits, butterscotch, and toasted orange peel with just a hint of sea spray.

Dried fruit and subtle campfire notes on the nose. The palate is sweet with flavors of malt, delicate fruit and light vanilla. The finish is light and silky with a subtle salty, sweet flavor.