Size750mL Proof80 (40% ABV)
What started as an April Fool's gag by Elon Musk, became a super-premium small-batch tequila in 2020. Crafted by Casa Maestri, Tesla is an añejo tequila that's made from blue Weber agaves and aged for 15 months in French oak casks.
Notify me when this product is back in stock. 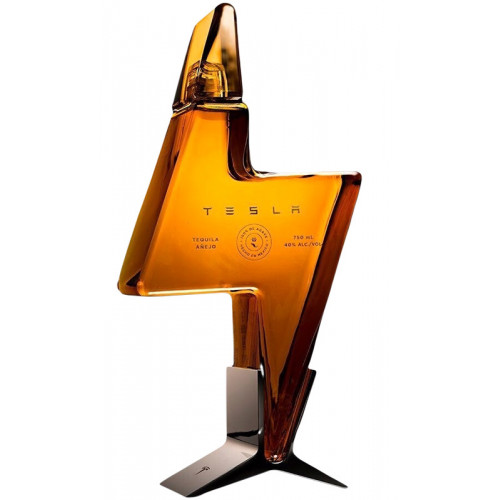 Elon Musk hardly needs an introduction. The founder of SpaceX and CEO of Tesla, Inc is a superstar entrepreneur and currently the wealthiest person in the world. On April Fool's Day of 2018, Musk teased "Teslaquila", a premium spirit. In 2020, two years later, the joke became a reality and Musk announced a partnership with California-based Nosotros Tequila for the launch of Tesla Tequila. The initial run sold out within a scant few hours.

Tesla is añejo tequila that is produced at the Casa Maestri distillery ― home to several tequila, mezcal, vodka, and various other spirits brands. One of the most awarded tequila distilleries, Casa Maestri uses ripe blue weber agaves that come from various regions in Los Altos de Jalisco. More than 100 different tequilas are produced there using stone ovens and autoclaves.

The small-batch tequila is aged for 15 months in French oak casks and bottled at 80 proof. Fruity with light vanilla and spice notes, the premium tequila comes in a sleek, lightning-shaped bottle that is hand-blown and ties into Tesla's electric design.

Get your bottle of Tesla Tequila today!

The nose is fruity and dry with agave and hints of light vanilla. The palate is balanced with cooked agave, oak, cinnamon, and pepper that linger on the finish.