Size750mL Proof102.2 (51.1% ABV)
Made from rare Folle Blanche grapes, this brandy is aged for eight years in French oak barrels before being bottled at cask strength.
Notify me when this product is back in stock. 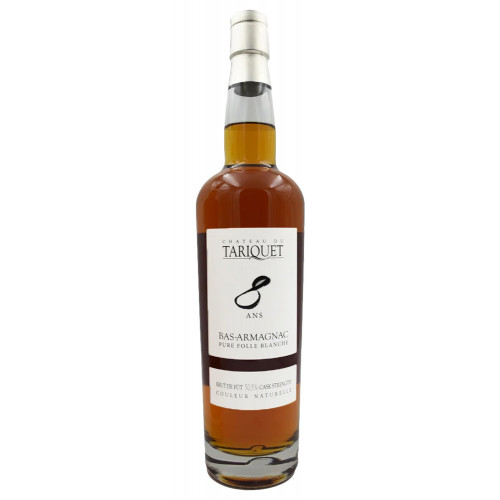 In the late nineteenth century, Artaud Pierre left his native France in search of work and adventure. A bear tamer by trade, he ultimately settled in the United States where he found a wife who bore him a son, Jean. Longing for his homeland, he returned to France in 1912 and instantly fell in love with Château du Tariquet. Located in southwest France in a region known as Gascony, Château du Tariquet traces its roots back to the seventeenth century. When Artaud purchased the estate, Château du Tariquet was in poor condition — most of the estate was dilapidated and the entire vineyard had been destroyed by disease.

One hundred years later, Château du Tariquet has been restored to its former glory, and it remains in the hands of the Pierre family. The estate has 811 hectares of grapes in production and 163 hectares of plantations.

Château du Tariquet 8 Year Bas-Armagnac is a type of brandy distilled from a single grape variety called Folle Blanche. A rare grape (less than 5% of vineyards in the Armagnac Appellation grow Folle Blanche), Folle Blanche is highly acidic and tart, and ripens later than most grapes. For years it was one of the major grapes used in the production of Cognac and Armagnac, but after phylloxera ravaged the French vineyards, the production of Folle Blanche suffered, and it was gradually replaced with the more neutral Ugni Blanc.

At Château du Tariquet, the Folle Blanche grapes are harvested in September and distilled in an alembic pot still heated by wood. After distillation, the brandy is aged for eight years in lightly-toasted French oak barrels. The aging process imparts a honey hue to the brandy, and the fine grains of the French oak provide notes of caramel and vanilla. After aging the brandy for eight years, it is bottled at cask proof to preserve the brandy's flavor and aromas.

A clean, intense nose with notes of cocoa and vanilla. The esters are subdued and reveal exotic fragrances. Round, rich, smooth and fine, it has notes of caramel and vanilla with a sweet refreshing flavor profile. It remains fresh and ripe, and the taste lingers. A great marriage of wood and fruit.