Size750mL Proof85 (42.5% ABV)
This whiskey earned a Bronze Medal, “Recommended,” from the Beverage Tasting Institute in 2017.
Notify me when this product is back in stock. 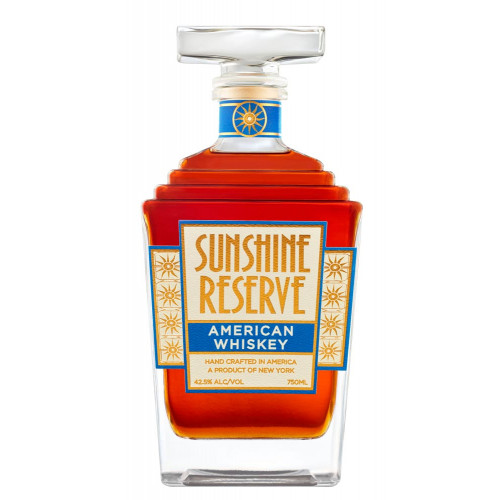 Sunshine Reserve American Whiskey is produced in New York. Currently the only whiskey from the label this unique whiskey is distilled primarily from oats, followed by rye, spelt, and malted barley.

The oats give the American whiskey soft, floral notes, while the rye grain gives the whiskey spice. Spelt is a rare grain to distill and imparts distinctive flavors of toasted coffee beans, complementing the oats on the palate. Another unique element about this whiskey is that the barrels used to aged the spirit are baked in a special convection oven giving the whiskey warm vanilla notes.

Smoky aromas, fruits, molasses and spice on the nose. The palate is robust and warming with bright with dry fruity notes, compelling baked goods, ash, marmalade on toasted malt followed by a smoky finish.