Learn more
Size1500mL ProofVodka: 80 (40% ABV) *Please note that the ABV of this bottle may vary
This duo pairs the soft, sweet honey of the vodka with the vibrant black raspberry, cherry and red plums of the Pinot Noir. A great gift for the Mom enjoys subtle touches of sweetness.
Notify me when this product is back in stock. 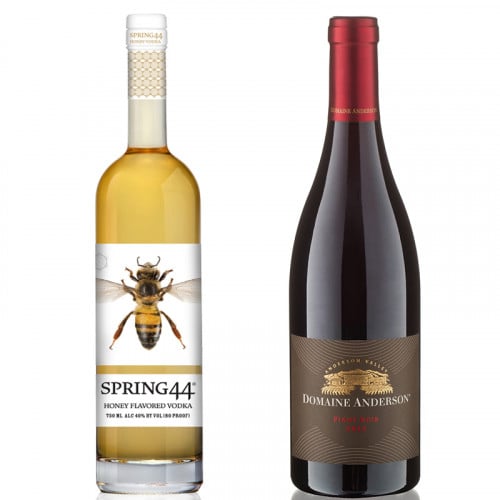 Just a few miles north of Denver, Colorado, Jeff Lindauer and Russ Wall are hoisting an , 450-gallon stainless steel water tank into the back of their Ford F-250 pickup truck. The truck, which the pair have nicknamed "Tinkerbell,"is used to transport water sourced from Spring44 back to their distillery in Loveland, Colorado. "The first time I knew we really had something really special was when the lab called and asked where I got it," says Lindauer about water sourced from Spring44.

In 1969, Don Lindauer — Jeff's father — purchased a 40-acre parcel of property in Northern Colorado that remains accessible only by navigating a jeep trail. The property, situated 9,000 feet above sea level and completely surrounded by the Roosevelt National Forest, is home to Spring44, one of the purest sources of water on Earth.

Spring44 water is never touched by chemicals or municipal water treatment plants — it comes directly from the ground. The spring isn't even served by an electrical grid — the power needed to source the water from the spring is generated entirely from the sun. Naturally filtered by earth, only one billionth of one percent (or 0.000000001%) of water in the world meets this strict definition. In addition, the water sourced from the spring is slightly acidic and has a low Total Dissolved Solids ratio, meaning it has virtually no taste except for a touch of sweetness. "It's high-quality water," says Joe Tamurini, a senior engineer at Tetra Tech, a firm that specializes in engineering and consulting services related to water.

Together with Jeff McPhie, Lindauer and Wall transport water sourced from Spring44 in Tinkerbell, which is outfitted with special suspension and gears in order in order navigate the jeep trail. At their distillery, the trio ferment a mash of corn, wheat and rye sourced from the Midwest before distilling it five times over in their custom-made, 50-gallon glass still. After distillation, the vodka is infused with raw, natural Colorado honey and brought to proof with water sourced from Spring44. Finally, the vodka is put through a unique, virgin coconut-husk carbon filtration process that removes any impurities.

Spring44 is an incredibly smooth and pure vodka. It has hints of vanilla and caramel, and a touch of sweetness as a result of the honey and Spring44 water. "It's a mix of legacy — the land of my father — and this spring," explains Lindauer. "We're building a truly great American brand. And we're doing it authentically."

Nestled in the beautiful, fog-cooled hillside and mountain terrain of Anderson Valley in Northern California, Domaine Anderson is making quite a statement as one of the newest wineries in the region. Located three hours north of San Francisco, Anderson Valley presents one of the chilliest environments for winemaking in all of California. Fortunately, Domaine Anderson’s winemaker Jerry Murray has experience crafting wines throughout many different climates — in the United States, Australia and even Germany.

"Oregon teaches you about urgency," says Lewis. "There, vineyards are more at the mercy of Mother Nature, who is less forgiving than she is in California. You have to learn to be very disciplined about your work in the vineyard, and a little crafty.”

Domaine Anderson hand-harvests its grapes in small lots before transporting the grapes immediately to its winery. There, the winery’s mantra of “minimum intervention” is applied, which entails gently extracting juices using a hydraulic press, barrel aging using an attentive élevage, and several other techniques which help capture the true essence of the Anderson Valley terroir.

Domaine Anderson Pinot Noir 2012 is Domaine Anderson’s inaugural vintage, and has a vibrant nose filled with black raspberry, cherry and red plums. On the palate, the wine’s fruitiness is balanced by clove and earthy tannins, and leads to a finish accented by molasses and sweet oak.

This Mother’s Day, pick up a wine that not only survived, but thrived in the harsh elements of Mother Nature herself and the vodka that will make her day even sweeter.

Spring44 Honey Vodka has a light gold hue. Aroma of honey, vanilla, nuts and a hint of pepper. Initially sweet with notes of honey and floral hints of lavender. Mid-palate is creamy and more viscous with notes of vanilla and caramel. Finish is long with notes of toasted nuts. Domaine Anderson Pinot Noir 2012 is Domaine Anderson’s inaugural vintage, and has a vibrant nose filled with black raspberry, cherry and red plums. On the palate, the wine’s fruitiness is balanced by clove and earthy tannins, and leads to a finish accented by molasses and sweet oak.