Size750mL Proof88 (44% ABV)
Slaughter House American Whiskey drinks like a fine Bourbon from the wrong side of town — it has a perfect high-corn mash bill, exceptional aging, and premium Wine cask finish.
Notify me when this product is back in stock. 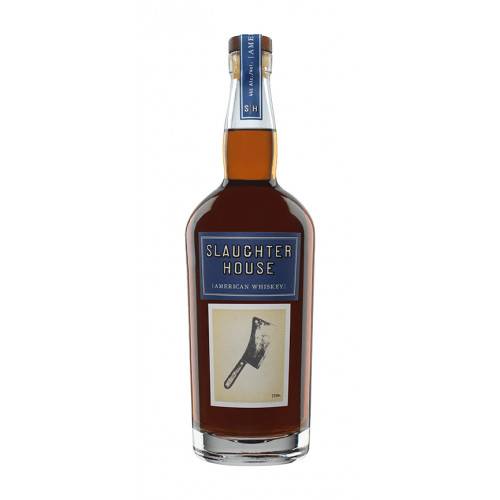 The term “splinter group” means a subset of people who broken off from the rest to pursue their own agenda. The Splinter Group as a company is a group of Napa Valley winemakers who have teamed up to finish classic American Whiskies in ex-Wine casks.

The Sinter Group was founded in 2013 by John Wilkinson of winemaker Bin to Bottle and Dave Phinney of Orin Swift Wines. They have since been joined by other experienced oenophiles (wine lovers) in the area, representing decades of experience. As non-distilling producers, they source their aged Whiskies from established producers across the midwest and southeastern United States and then blend them on site in northern California. The married spirits are finally finished in first-fill Wine casks. They have completed four products to date, including an American Whiskey, Bourbon, Rye, and a Sweet Vermouth.

If the legal rules and regulations were a bit different, Slaughter House American Whiskey might be called a Bourbon. The mash bill is 85% corn, 8% wheat, 6% rye, and 1% malted barley and the spirit has been aged nine years in “American Oak” before being finished in Napa Valley Bordeaux Wine casks. All that sounds great for a spot-on, crafted Bourbon. But legally, Bourbon requires that the initial aging be conducted in new charred oak — the slightest variation does not qualify.

But even though this fine Whiskey is not a Bourbon in the legal sense, that’s how you should imagine flavor profile — as a well-aged, high-corn Bourbon finished in premium Wine casks that add a perfumed aromatics and fruit-forward palate.

“An irresistible American Whiskey with endless layers and an everlasting finish.”

Inviting aroma of caramelized sugar, baking spices, dark fruits, butterscotch and vanilla. The palate, smooth and layered with hints of rich toffee, leads to a finish filled with honey, biscuits and maple.