Size375mL Proof80 (40% ABV)
Our/Vodka takes the same recipe to a collection of micro-distilleries around the globe. This one was crafted in the City of Angels and has fittingly won a gold medal at the Los Angeles Spirits Competition.
Notify me when this product is back in stock. 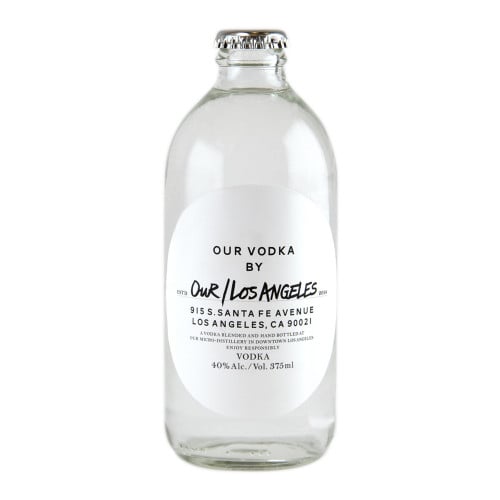 Launched in 2011, Our/Vodka is the passion project of six entrepreneurs from Stockholm. The mission was to create a global brand with local roots. Founder and CEO Åsa Caap developed the brand in secret with her co-founders, Kalle, Mattias, Ted, Ola, and Mårten, for two years before receiving funding from Pernod Ricard.

Our/Vodka, a global family of local vodkas made in micro-distilleries in cities around the world. With micro-distilleries in Berlin, Detroit, London, Amsterdam, Los Angeles and New York, Our/Vodka is partly distilled, blended in small batches, and hand-bottled on-site at each micro-distillery. Each facility follows the same global recipe, using locally sourced ingredients giving each vodka its own distinctive flavor profile.

Our/Los Angeles takes the recipe for a tour of the City of Angels. Created by a team of 3 Angelenos, the distiller Anton Van Der Woude, the entrepreneur Rupert Runewitsch, and Samantha, it was distilled in the arts district of downtown LA. It was first made in 2016 from organic wheat and purified, demineralized, and deionized Los Angeles water and is the 6th in the line of Our/Vodka spirits. Fittingly, this vodka struck gold at the Los Angeles Spirits Competition.

It's a neutral, fresh, and pure spirit with a light sweetness and fruity profile. Some gentle grain notes and a touch of spicy cloves round up this smooth drinker.