Size750mL Proof86 (43% ABV)
This recipe spent over a century in the moonshine business. Crafted from Hickory Cane corn, and cut using pure mountain water. Using the same basic techniques used by the Lovell family for generations, this sour mash is a seasoned vet.
Notify me when this product is back in stock. 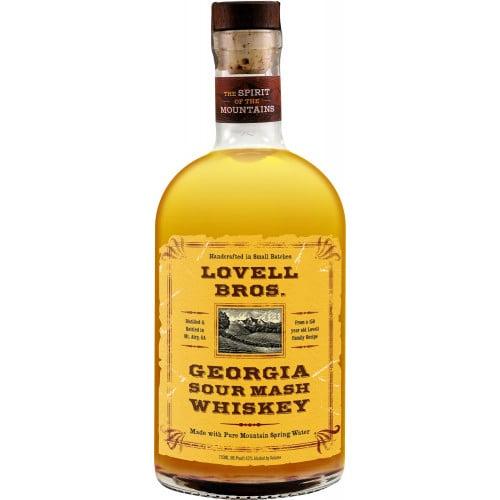 Meet Carlos Lovell. The son of a seasoned moonshiner who brought his father’s 150-year-old recipe above ground and into your glass. The Lovell Bros. story is breath of authenticity amongst a trendy new wave of moonshiners. Carlos Lovell has been making spirits since the ripe age of 16. “He and his brother, Fred, learned the family recipe from their father in the 1940’s and have been perfecting it (and drinking it) ever since” (Lovell Bros.).

Their father had a legendary moonshine outfit, housing at least three main still operators. In the Lovell family moonshine was what kept food on the table. They eventually closed their bootleg operation in the 1960’s and Carlos Lovell went to work. Well over a century after this clandestine family enterprise went out of business, at the ripe age of 84, Carlos decided to get back into the art of distilling (legally) and founded Ivy Mountain Distillery with his daughter Carlene, in 2012.

Lovell Bros. distills using the same basic techniques used by the Lovell family for generations. Utilizing the same basic copper steam still and boiler design, a double thumper barrel wash system provides double distillation in a single go. The Lovell's pride themselves on turning corn and pure mountain water into sour mash. Ivy Mountain currently has two expressions in their line-up: both are corn based spirits, one an aged sour mash, the other white dog (un-aged distillate). Both whiskies are made using all natural, pure local spring water, and crafted from Hickory Cane corn, a type of heirloom corn once used by the Native Americans of the South. The mash bill is topped off with “a handful of barley.”

Sour mash whiskey traditionally uses a bourbon recipe (at least 51 percent corn) but starts the mash with leftovers from a previous batch, yielding a sweeter, deeper flavor to the spirit. Lovell Bros. distills using the same basic techniques used by the Lovell family for generations. Their aged “Georgia Sour Mash Whiskey” is essentially their Georgia Sour Mash White Whiskey, matured in used oak barrels purchased from Jack Daniel’s barrels, for an unstated amount of time. Bottled at 43% ABV this aged white dog is a lumberyard on the nose, with some baking spice and vanilla notes.

Oak on the nose with some baking spice and vanilla notes. On the palate are more baking spices, baked apples, bananas, white grape, light brown sugar, and earthy notes. The finish is smooth, with a light burn.