Size750mL Proof92 (46% ABV)
This exquisite Kavalan whisky has won several prestigious awards, including A Gold at the World Whiskies Awards. The expression also received a Gold in its category at the International Spirits Challenge. 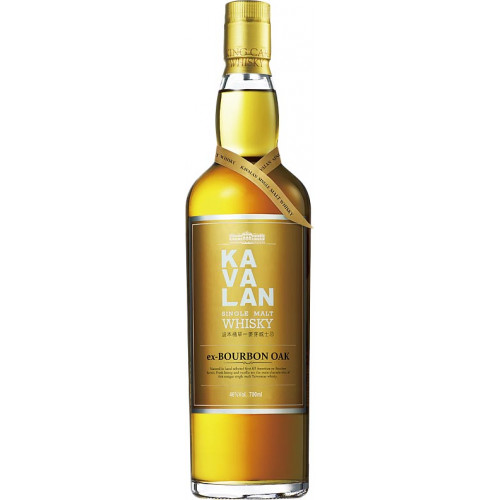 Kavalan Taiwanese Single Malt Whisky is crafted by the King Car Group, which was established in Taiwan in 1956. The whisky is made entirely in Taiwan from malted barley that is imported from Scotland. Once the grains arrive in Taiwan, they are milled and mashed, before being fermented with water drawn from springs situated in the Central and Snowy Mountain ranges. This incredibly pure and quintessentially Taiwanese water source adds slightly mineral, round flavors to the whisky. Following fermentation, the wash is distilled through lantern-shaped copper-pot stills that were previously used at the Glenlivet Distillery. Due to the small size and shape of the stills, the whisky interacts with the copper, resulting in an incredibly pure and fruity flavor profile.

“Kavalan ex-Bourbon Oak dilutes Solist ex-Bourbon with Kavalan spring water to 46% strength. It is incredibly smooth with a soft sweetness, losing the harshness and the alcohol edge and lingering over those unique flavors. It is clean and fresh tropical fruitiness with pleasant vanilla, coconut and spices” (Kavalan).

After the whisky has been distilled and diluted, it is aged for at least 3 years in ex-bourbon casks. The small batch version of the brands flag ship ex-bourbon barrel cask strength release is highly acclaimed. It has a rich depth depth of flavor, much like its single cask sibling, without the alcohol strength. Kavalan is among one of the most award winning whisky brands of all time. This exquisite single malt whisky has won several prestigious awards, including A Gold at the World Whiskies Awards. The expression also received a Gold in its category at the International Spirits Challenge.

Get your bottle of this exquisite Taiwanese single malt today!