Learn more
Size750mL Proof80 (40% ABV) *Please note that the ABV of this bottle may vary
Only 1,980 bottles of this limited edition vodka, which was made using rare, Virgin New Potatoes, have ever been produced.
Notify me when this product is back in stock. 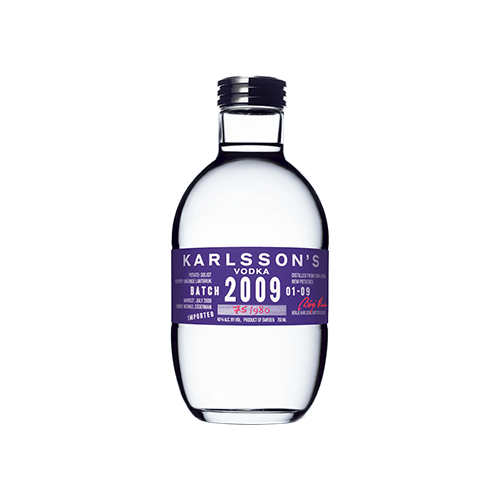 Situated in southwest Sweden and surrounded almost completely by the North Sea, Cape Bjäre (Bjärehalvön) is a small peninsula that is home to approximately 50 farmers and their families. The cape's proximity to the sea, along with its rich, sandy soils produce extraordinary Virgin New Potatoes that are known locally as "Farmer's Gold."

A delicacy in Sweden (the potatoes sell for upwards of $150 per pound), Virgin New Potatoes are an heirloom varietal that are harvested early in the season — typically between June and September. "A Virgin Potato is a young potato," says Arne Nilsson, a farmer in Cape Bjäre. "It hasn't fully developed a skin yet. In order to see if it's a Virgin New Potato, you should be able to peel the skin off with your thumb." In addition, Virgin Potatoes are rich in minerals and water content, allowing them to to reflect the unique terroir of Cape Bjäre.

Karlsson's Vodka is the brainchild of Börje Karlsson, the man who also created Absolut Vodka (Karlsson was the Head of Laboratory and Product Development at the V&S Group during the development of Absolut). Karlsson believes that potatoes should be carefully selected with the recognition that their flavor profile varies each harvest, much like grapes are selected for wine.

Karlsson's Batch 2009 Vintage Vodka is made exclusively from a single harvest of Solist Virgin New Potatoes from the Mäsinge Lantbruk farm in Cape Bjäre, Sweden. The Solist potato has a round shape, along with an off-white flesh and thin, easily-peeled pale yellow skin. Solist potatoes are generally planted early in the season — typically between March and April — and are often used in Swedish cuisine.

After the potatoes are harvested, Karlsson mashes and ferments them before distilling the wash through a single pass and bottling the vodka without filtration. This preserves the natural flavors of the potato and yeast, and allows Karlsson's Batch 2009 to showcase its notes of vanilla, black pepper and citrus.

Only 1,980 bottles of this limited edition vodka have ever been produced. Pick one up today!

Initial flavors are sweet and creamy with notes of vanilla. Stronger notes of black and white pepper mid-palate, with a touch of grapes and citrusy flavor. Finish is long and spicy.