Caskers Rewards members earn up to 2 store points back when buying this bottle.

Size375mL Proof90 (45% ABV)
These bourbons represent an entirely unique approach to crafting bourbon from a family that has been making it since the dawn of the American Revolution.
Notify me when this product is back in stock. 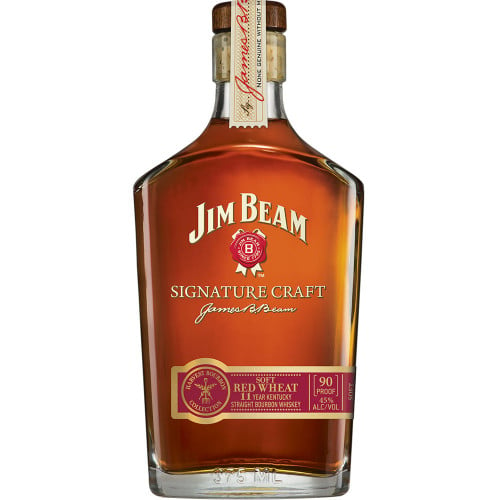 Jim Beam Quarter Cask Bourbon is the newest release in the Jim Beam Signature Series. It is made from a blend of five and six year old Kentucky bourbons that are aged in traditional fashion, together with four, five and six year old Kentucky bourbons that have matured in quarter casks. As a result, the bourbon has an aroma of bananas, caramelized fruit, orange peel and vanilla cookies. Notes of vanilla, milk chocolate, coffee, espresso and whipped cream dominate the palate, and lead to a rich and fruity finish.

Jim Beam 12 Year Old Signature Craft Bourbon Whiskey was released in 2013 and is one of the oldest bourbons Jim Beam has ever released. The bourbon has soft, sweet notes of marzipan, creamy vanilla, honey and cinnamon that are complemented by a subtle oaky undertone. In addition, the finish intensifies the notes of vanilla, caramel and oak, and is complemented by a touch of smoke. "We were able to manage the flavors just right," says Noe.

Jim Beam Signature Craft Bourbon Whiskey Rare Spanish Brandy Finish is a limited edition bourbon that pays homage to a bourbon that was released in Australia. Rather than finishing the bourbon in casks that were previously used to mature brandy, Jim Beam Signature Craft Rare Spanish Brandy is made by adding a small aliquot of rare Spanish brandy to the bourbon. As a result, the bourbon has sweet notes of dates, raisins and figs that give way to graceful notes of caramel, vanilla and cinnamon. The finish is gentle and satisfying, with a crisp, sweet finish.

The Jim Beam Signature Craft Bourbon Whiskey Series represents an entirely unique approach to producing bourbon from a family that has been making it since the dawn of the American Revolution. "If you get stagnant, people are going to stop looking at you," says Noe. "Bourbon is hot all over the world. People read about this stuff, and they want it." Try three bourbons you want today!