Be the first to review this product
This Cinnamon Apple Vodka is incredibly smooth, bottled with natural cinnamon apples.
$25.99
Add to Wish List

Infuse Spirits is aptly named. Seth Benhaim started infusing spirits in his garage in 2012 at the age of twenty-five. When he entered his first Vodka releases that year in the San Francisco Worlds Spirits Competition, his accomplishments made him the youngest ever winner of both Best in Show and Double Gold.

Infuse Spirits has gone on to develop a wide range of products, including six Vodkas, a Bourbon, a Rye, and a range of six unique cocktail bitters. Infuse Spirits Vodkas are naturally flavored with spices and fruits. This Cinnamon Apple Vodka is smooth with pure cinnamon apple notes, earning Double Gold at the 2014 San Francisco World Spirits Competition and Gold at the 2014 Sip Awards.

Smooth with pure cinnamon apple notes al throughout the nose and palate. 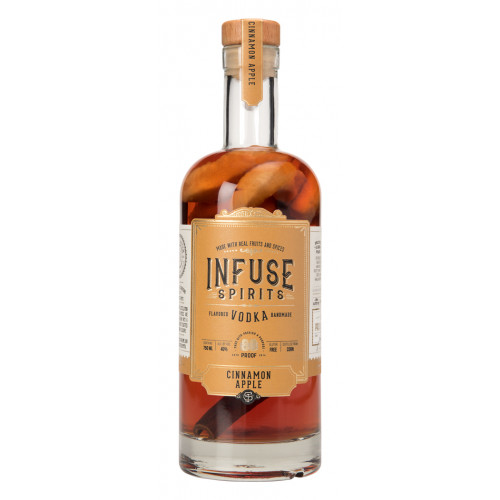