Learn more
Size750mL Proof60 (30% ABV) *Please note that the ABV of this bottle may vary
Roughly a pound of beach plums is used in each bottle of this gin, only 1,800 bottles of which have ever been made. 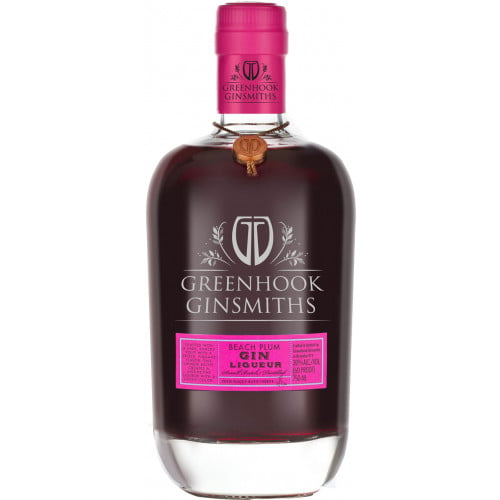 Native to the coastal dunes of the northeastern United States, beach plums have been used for generations to create preserves and jams. Close relatives to sloe berries and damson plums, beach plums have a high pit-to-flesh ratio, resulting in an intensely tart and astringent fruit. While farmers have succeeded in domesticating most Northeastern fruit such as cranberries and Concord grapes, beach plums have defied attempts at commercial production. Incredibly sensitive to climate and elevation, beach plums are a finicky fruit — they require low-lying sandy soils to grow and nearly two years to mature.

Steven DeAngelo, master distiller at Greenhook Ginsmiths in Brooklyn, came across a few farmers in New York who had wild beach plums growing on their estates. "I wanted to make a traditional sloe gin,"he says, but when he came across the beach plums, he decided to put a Yankee spin on the traditionally English spirit. "I think I bought every beach plum on Long Island,"he quips.

He begins the process by distilling a gin with traditional botanicals — juniper berries from Tuscany, organic chamomile, organic elderflower, blue ginger, orris root and Ceylon cinnamon. His custom-made, 300 liter copper alembic still is outfitted with a specially-designed mercury vacuum, allowing him to reduce the atmospheric pressure in his still during distillation. As a result, DeAngelo is able to distill his gin at lower temperatures (nearly 40 degrees lower!) than traditional ginsmiths, resulting in a cleaner, more pristine spirit that captures the raw integrity of the botanicals.

After distillation, he steeps the entire beach plum — pit and all — in the gin for approximately seven months. Following maceration, he adds a touch of organic cane sugar before filtering the gin and labeling each bottle by hand.

With roughly a pound of beach plums per bottle, the result is a fruity, bittersweet gin — the beach plums' intense, assertive flavors play against the juniper, coriander, elderflower and chamomile used to create the gin. The result is a gin with a tart, sour cherry nose and notes of bittersweet fruit that give way to a long, dry finish with hints of spicy coriander, chamomile and bitter almonds.

"I wanted to focus a little bit more on the underlying gin," says DeAngelo. "I didn't want to just make it sweet like a lot of fruit liqueurs. I wanted to have a gin liqueur where you could actually taste the gin. It's about the harmony of the fruit with the gin."

Nose of sour cherries and plums. Initial notes of fresh plums and cherries with subtle hints of chamomile, coriander and cinnamon. Sweet with a touch of spice. Long, dry finish.