Learn more
Size3000mL Proof24 (12% ABV) *Please note that the ABV of this bottle may vary
Grand Cordon Champagne takes the striking red ribbon design to a new level with the iconic ribbon molded in the glass. The Champagne is a blend of 45% Pinot Noir, 45% Pinot Meunier, and 30% Chardonnay from more than 100 crus.
Notify me when this product is back in stock. 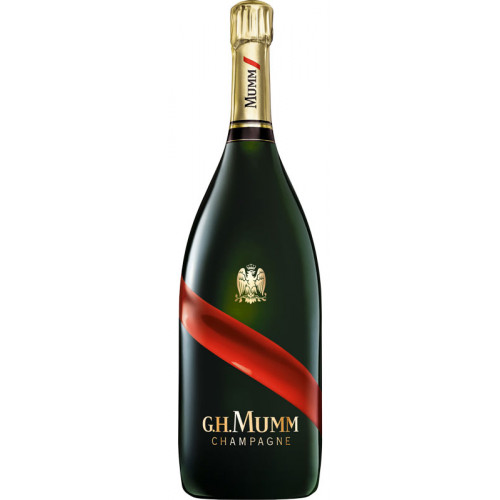 The Mumm family can be traced back to the 12th century, its lineage including barons and knights. In 1761, the family entered the wine business as both producers and merchants. They operated out of Cologne, Germany under the name P.A. Mumm. In the early 19th century, Peter Arnold Mumm's sons made the decision to branch out into sparkling wine, having recognized the potential of the Champagne region.

Thus, a new branch of the family company was formed in 1827 and named GH Mumm once Georges Hermann Mumm took over the reins in 1852. Today, the company is owned by Pernod Ricard. GH Mumm is one of the largest Champagne producers in the world, its vineyards covering 218 hectares (539 acres), 160 of these classified as grands crus. With a strong commitment to terroir as well as innovation.

The Cordon Rouge was first released in 1875 under Georges Hermann Mumm. The bottle was adorned with a red silk ribbon, inspired by the red sashes that were bestowed upon anyone receiving the highest of French honors, the Royal and Military Order of Saint Louis. Grand Cordon Champagne builds on this design with the ribbon molded in the glass, resulting in a luxuriously attractive bottle. It's a blend of 45% Pinot Noir, 45% Pinot Meunier, and 30% Chardonnay. A part of the reserve wines is aged in oak vats. Sourced from more than 100 crus, this results in a balance of power, structure, elegance, minerality, and fruitiness.

You'll find steady, persistent bubbles and aromas of ripe peach, apricot, pineapple, as well as hints of pastry, vanilla, honey, and dried fruit. The palate is deep and complex with fresh fruit notes giving way to a long and powerful finish.