Caskers Rewards members earn up to 3 store points back when buying this bottle.
Size1500mL Proof100 (50% ABV)
An exceptionally high level of detail is paid while distilling these bottles to ensure consistently outstanding quality. Unparalleled utilizes only the best-in-class varietals while Four Roses uses a unique one-story aging warehouse both resulting in extremely vibrant, fruity, yet complex, taste profiles.
Notify me when this product is back in stock. 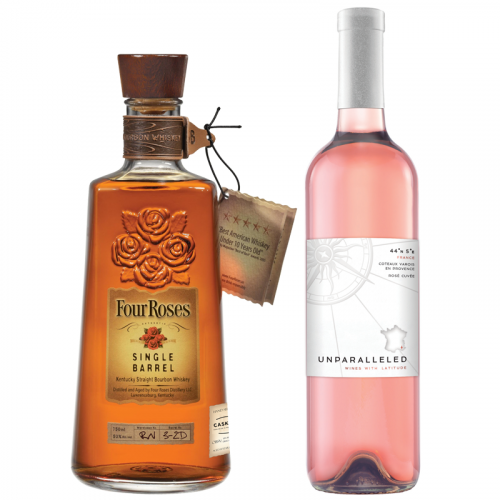 Four Roses Single Barrel Kentucky Straight BourbonOn the banks of the Salt River, nestled in the quiet Kentucky countryside near Lawrenceburg, Four Roses Distillery is a testament to American ingenuity and perseverance.  Built in 1910 to resemble the architecture of California wineries, the distillery — now listed on the National Register of Historic Places — was one of six distilleries that was granted permission to operate during Prohibition.

While most distilleries age bourbon in warehouses that are many stories high, Four Roses ages its bourbon in a one-story warehouse to ensure that each barrel is aged in a similar environment.  In addition, each bottle of Four Roses available through Caskers is the product of a single barrel (rather than a blend of multiple barrels), giving each bottle a unique flavor profile and history.

Produced in Coteaux Varois en Provence, which is located in Southern France, Unparalleled Rose Cuvée has a taste as vibrant as its mesmerising, rose pink color. Sourced from a beautiful wine estate in the picturesque massif de la Loube, this cuvée in essence reflects the overarching mission the Unparalleled brand — to seek out best-in-class varietals from the finest winemaking regions across the globe, and to make those varietals accessible to all wine lovers.

Unparalleled Rose Cuvée is a blend of Syrah and Grenache grapes, which are influenced by the rocky, gently sloping hills of Southern France and the region’s proximity to the Mediterranean Sea. This climate, along with the clay-limestone soil in which the grapes grow, creates ideal conditions for a rose wine. Once harvested, the wine ferments in concrete tanks at 45 degrees fahrenheit until dryness. Lastly, the wine is aged in fine lees for a period of four months before being bottled.

As a result, Unparalleled Rose Cuvée has a pale pink color, and an bouquet of melon and tangerine. The palate contains fresh flavors of pomegranate and grapefruit, and leads to a delicate and semi-dry finish.

Pick up a these lovely rose bottles for the loveliest lady in your life today!

Four Roses Single Barrel Kentucky Straight Bourbon has a nose of plum and cherries, the bourbon is well-balanced and has notes of maple syrup, cinnamon and nutmeg. Unparalleled Rose Cuvée has a pale pink color, and an bouquet of melon and tangerine. The palate contains fresh flavors of pomegranate and grapefruit, and leads to a delicate and semi-dry finish.