Caskers Rewards members earn up to 3 store points back when buying this bottle.
Size750mL Proof117.5 (58.75% ABV)
Crafted by hand through every step of the process, this limited edition bottling of FEW Bourbon Whiskey, which earned a score of 93 points from the Beverage Testing Institute, was bottled at cask strength.
Notify me when this product is back in stock. 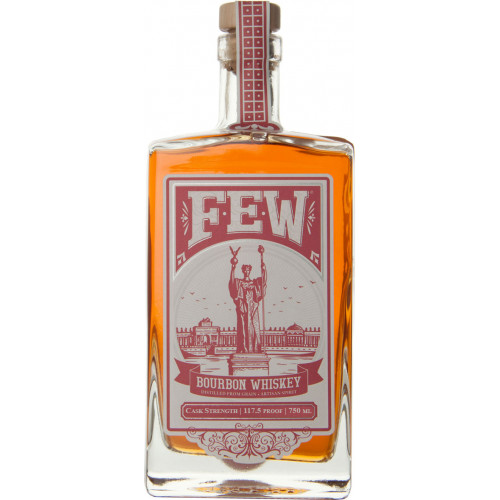 Hletko's three-grain bourbon recipe infuses generations of southern tradition with northern rye and a touch of a malt for smoothness. Aged in custom-made oak barrels from Minnesota, FEW Bourbon Whiskey has hints of plum, cherry and vanilla which give the bourbon its sweetness and balance out the notes of spicy rye, clove and pepper.

While many distilleries buy neutral grain spirit that they further distill into gin or whiskey, every drop of FEW Bourbon is made by hand in Hletko's space in downtown Evanston.  Hletko buys his corn from a farmers' co-op in Indiana and his barley and rye from farmers in Wisconsin. The bourbon's flavor and lingering spice — which intensify the longer they hang around — earned FEW Bourbon Whiskey the Silver Medal at the San Francisco International Spirits Competition in 2012 and a score of 93 points from the Beverage Testing Institute.

Frances Elizabeth Willard, founder of the Women's Christian Temperance Union, would not be amused.  As one of the leading figures in the movement that brought about Prohibition — and kept Evanston dry from 1855 until 1972 — it's unlikely she'd approve of its cheeky name, either, which is sometimes written as "F.E.W. Spirits."

"People say she's rolling over in her grave," Hletko jokes. "I wouldn't know about that — the name is just a coincidence."

This special, limited edition bottling of FEW Cask Strength Bourbon Whiskey was bottled at cask strength, a robust 117.5 proof. Pick up a bottle today before they're all gone!

With a rounded sweetness that balances out the spice infused by the grains, notes of plum, cherry and vanilla lay gracefully on the palate.