Caskers Rewards members earn up to 4 store points back when buying this bottle.
Size750mL Proof80 (40% ABV)
Badass smooth 6-times distilled vodka created by the bad boy of basketball. Made for living it up or promoting peace with North Korea.
Notify me when this product is back in stock. 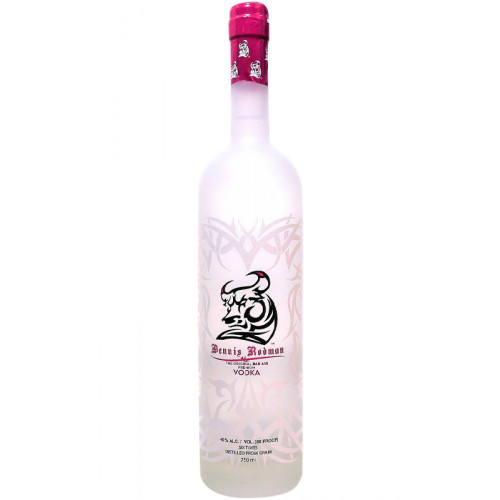 A vodka to bring about world peace? Produced by a five-time NBA champion and an overall badass human being Dennis Rodman? Read on...

After achieving it all as a professional basketball player, Rodman turned to endorse his favorite spirit. Dennis Rodman The Original Bad Ass Premium Vodka is a six-times distilled, all-American made vodka produced and distilled by United Spirits. With "the Worm" being the perfect representative for a wild night out and a great party, this vodka was created to get the party started and make sure you won’t be disappointed when you’re living it up. With the bottle design featuring a tribal tattoo pattern and a nod to Dennis's Bulls years, this vodka is smooth enough to be enjoyed straight, or mixed with cranberry juice or soda.

The controversial basketball star, famous for his bad-boy image, and his friendship with the North Korean dictator Kim Jong-un, Rodman believes his new liquor could play a role in ushering peace talks between the U.S. and the totalitarian state. “Everyone knows [President Barack] Obama drinks beer,” Rodman said. “But you know what? I’m pretty sure he does have a cocktail here or there. I’d love to see him with a ‘Bad Ass Vodka’ shot in his hand, toasting to Kim Jong [Un] and me. That would be awesome.” Finding common ground in drinking vodka? A noble cause, indeed.