Size750mL Proof80 (40% ABV)
The ultra-limited Grande Champagne cognac, initially released in 2019 in celebration of Jay-z's 50th birthday. 250 from one single barrel released, 200 of which are available for sale.
Notify me when this product is back in stock. 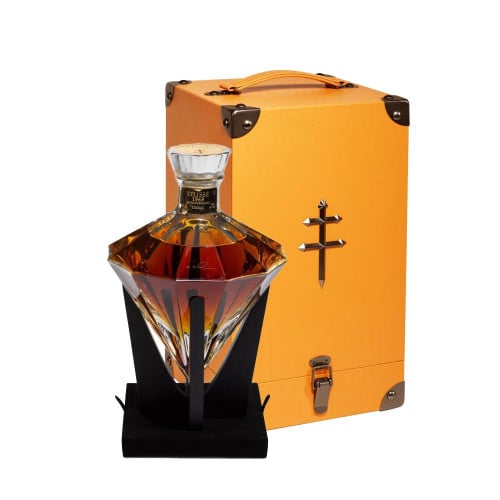 First released in 2019 to mark hip-hop mogul Jay-z's 50th birthday, D’Ussé 1969 Anniversaire Limited Edition is an ultra-limited Grande Champagne cognac. Bottled from a single barrel and matured in a cellar at Château de Cognac, additional 250 bottles have now been released with only 200 of which will be available for sale. A luxurious expression, it comes in a 12-cut crystal diamond decanter design and a high-end leather box, equipped with a booklet featuring the cognac's description by its creator and Maître de Chai Michel Cassavechia.

The Cognac house has remained in the family ever since. Situated in the Cognac region overlooking the Charente, the historical Château de Cognac castle is the birthplace of French King François I, where cognac production has been taking place since 1796. The chateau was chosen largely due in part to its cellars, which provided unique properties for the aging of the cognacs. D’Ussé Cognac is a product of Bacardi that is produced at the Chateau de Cognac. Released in June of 2012, in New York, d’Ussé is a collaboration with hip-hop mogul Jay-Z.

A bright gold hue. The sophisticated nose greets with rich aromas of fresh walnut, candied apple, and hazelnut. The palate further reveals woody notes and a long finish of stewed fruits, a touch of leather and cigar box.