Size750mL Proof117 (58.5% ABV)
This new cask strength release from Clyde May's Whiskey at 117 proof has a bolder flavor than prior releases — a full proof version of the classic!
Notify me when this product is back in stock. 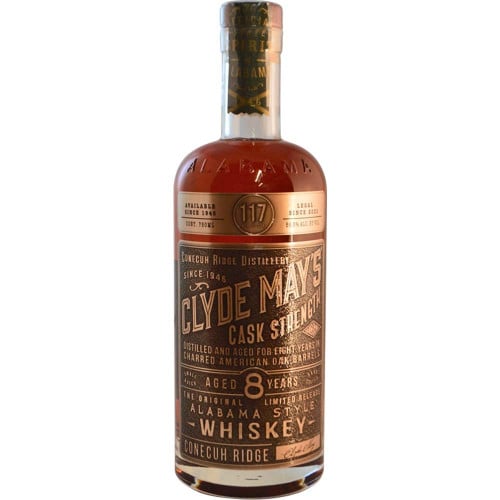 Always distilling whiskey outside the law, May was arrested in 1973 and served an 18-month sentence at the Maxwell Air Force Base. "He sure had a reputation for making fine whiskey," said Thomas Allison, a former officer with the United States Bureau of Alcohol, Tobacco and Firearms. Upon his release, May gave up his cell to the man who convicted him Attorney General John Mitchell, who was convicted in 1974 on charges relating to the Watergate scandal.

Today, Clyde May's Whiskey continues to be made from the same recipe that Kenneth's father perfected nearly 50 years ago — a mash of corn, rye and malted barley. Once the grains are distilled, they are aged in charred American Oak barrels for eight years.

This new cask strength release from Clyde May's Whiskey at 117 proof is older and bolder than prior releases — a full-proof version of the classic! On the nose, red apple skins and flesh mix with pepper and vanilla, continuing to a fruity palate followed by a long lasting finish of apple, spice, toffee, and vanilla.

Complex aroma of red apple skins and flesh mix with pepper and vanilla, continuing into a fruity palate and a long lasting finish of apple, spice, toffee, and vanilla.