Size750mL Proof80 (40% ABV)
This vodka is a blend of fruit extract — made from 100% organically grown blood oranges — and Charbay Clear Vodka, the best vodka in the world.
Notify me when this product is back in stock. 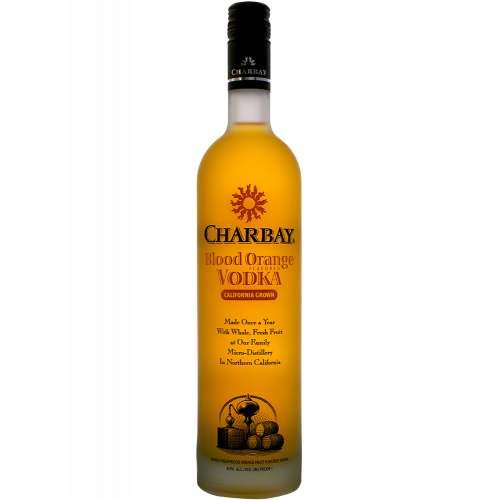 Each winter, Marko Karakasevic, master distiller at Charbay Distillery, travels to Central California and selects organically grown, tree-ripened blood oranges at their peak maturity. The oranges are delivered to his distillery in St. Helena, California within three days and crushed — skins and all — by Marko (a 13th generation master distiller!) and his team.

Blood oranges' distinctive crimson pigment is a result of high levels of anthocyanins, an antioxidant thought to protect against ailments such as cancer, inflammation and diabetes. Grown in cool climates, blood oranges are more intense than ordinary oranges and have unique, raspberry-like flavors in addition to typical citrus notes. Using a secret process that takes nearly six months, Marko and his team extract the flavor, color and antioxidants from the blood oranges. The fruit extract is then blended with Charbay's award-winning Clear Vodka.

Charbay Clear Vodka, which has been rated the best vodka in the world twice by the Spirit Journal, is distilled from 100% American Midwest corn and rye. Distilled in a double copper alembic charentais pot to 192 proof, Clear Vodka is gently, gently filtered and bottled by hand.

Try some of the best vodka today!

Bouquet of citrus and fresh oranges on the nose. Warm and silky, the blood oranges have a rosy note with a pure, simple and incredibly natural flavor. Finishes nicely with a sweet hint of citrus which gently fades.